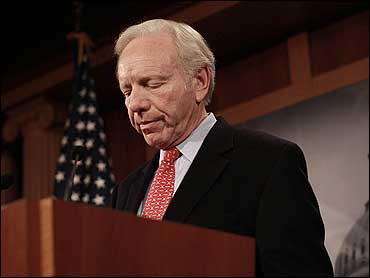 (AP/Lauren Victoria Burke)
Sen. Joe Lieberman took another step farther away from the Senate Democratic caucus this week, when he said he may support some Republican candidates in the 2010 elections and may not run as a Democrat when he is up for reelection in 2012.

"I probably will support some Republican candidates for Congress or Senate in the election in 2010. I'm going to call them as I see them," Lieberman join a Republican filibuster against the Democrats' health care bill as it is currently written. Lieberman opposes the bill's government-run health insurance plan.

At least one Democratic leader on health care, however, thinks Lieberman will change his tune on the issue.

"When it comes down to getting the 60 votes necessary to pass this bill, I do not believe that Joe Lieberman would want to be the one person who caucuses with the Democrats … to bring this bill down. I don't think he wants to go down in history like that," Sen. Tom Harkin (D-Iowa) told reporters Thursday. "He still wants to be a part of the Democratic Party although he is a registered independent. He wants to caucus with us and, of course, he enjoys his chairmanship of the [Homeland Security] committee because of the indulgence of the Democratic Caucus. So, I'm sure all of those things will cross his mind before the final vote."