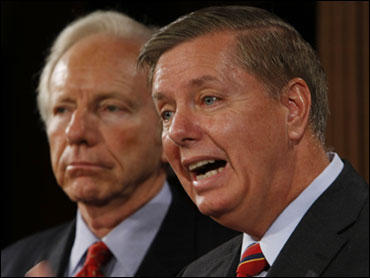 "To release the photos is, to me, sheer voyeurism," Lieberman said. "It's a disclosure without a purpose, and it's disclosure that brings great risk."

Lieberman said President Obama "did the right thing" in opposing the release of such photos last month. He said doing so would "lead to people entering the war against the United States."

"In our opinion, the release of these photos -- for no purpose at all, no good purpose -- will lead to the death of Americans, including, particularly, those brave Americans who serve us in the military," said Lieberman.

Graham suggested that the two senators would effectively shut down the Senate via filibuster if Congress does not pass the legislation. "We're not going to do any more business in the Senate," he said. "Nothing's going forward until we get this right."

It's far from certain that the Act – which was attached as an amendment to the congressional war supplemental spending bill – will be passed. House Democrats have signaled opposition to the legislation, and there are reports that the amendment has been removed by House legislators amid pressure from liberal groups.

(It is not entirely clear where things now stand; Politico reports that House Speaker Nancy Pelosi has been working on a deal to kill the legislation if a judge blocks the American Civil Liberties Union lawsuit seeking the pictures.)

Graham said today that if the House removes the amendment in conference, "it will be one of the most outrageous and irresponsible acts in the history of the Congress." The reason, he said, is that House members would be dismissing "advice from commanders in the field at a time of war."

"What is driving them?" asked Graham of House Democrats who oppose the legislation. "Who is running the House? Is the ACLU now in charge of the House of Representatives?"

In a statement yesterday, the two senators said they would attach the bill, which gives the Defense secretary the power to suppress interrogation photos for three year periods, to every bill that comes before the Senate until it passes.

"Let it clearly be understood that without this legislation the photos in question are likely to be released," they said. "Such a release would be tantamount to a death sentence to some who are serving our nation in the most dangerous and difficult spots like Iraq and Afghanistan."

The war supplemental bill has also been imperiled by Republican opposition to the inclusion of a $108 billion line of credit for the International Monetary Fund (at a cost of $5 million). Members of the House and Senate are now trying to work out a compromise on the already-delayed bill, which deals with funding for fighting the wars in Iraq and Afghanistan as well as other issues.