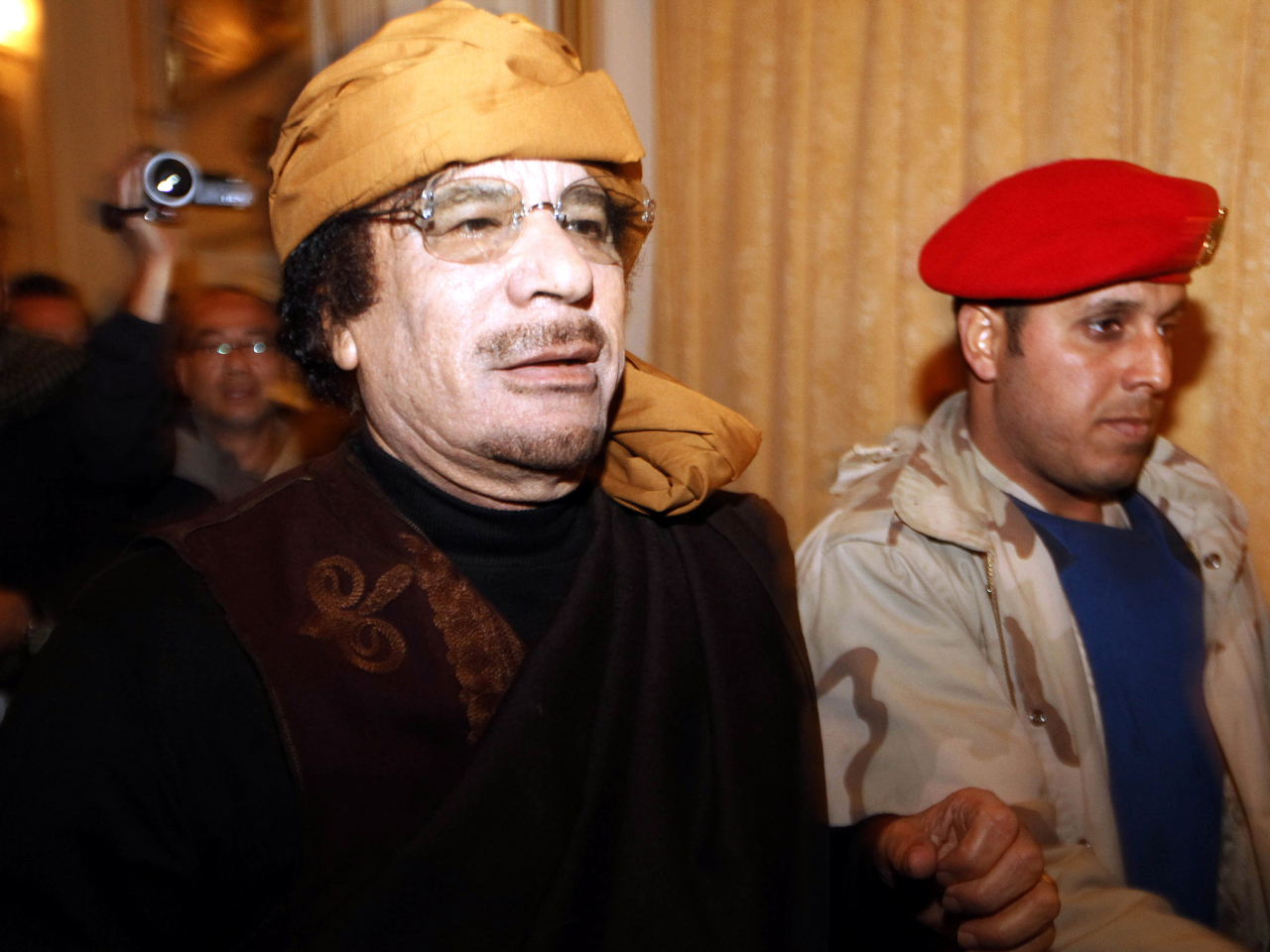 "We have been waiting for this moment for a long time. Muammar Qaddafi has been killed," Prime Minister Mahmoud Jibril told a news conference in the capital Tripoli.

The 69-year-old Qaddafi is the first leader to be killed in the Arab Spring wave of popular uprisings that swept the Midde East, demanding the end of autocratic rulers and greater democracy. Qaddafi had been one of the world's most mercurial leaders, dominating Libya with a regime that often seemed run by his whims and bringing international condemnation and isolation on his country for years.

Initial reports from fighters said Qaddafi had been barricaded in with his heavily armed loyalists in the last few buildings they held in his Mediterranean coastal hometown of Sirte, furiously battling with revolutionary fighters closing in on them Thursday. At one point, a convoy tried to flee the area and was blasted by NATO airstrikes, though it was not clear if Qaddafi was in the vehicles. Details of his death remained unverified.

Al-Jazeera TV showed footage of a man resembling the 69-year-old Qaddafi lying dead or severely wounded, bleeding from the head and stripped to the waist as fighters rolled him over on the pavement.

The body was then taken to the nearby city of Misrata, which Qaddafi's forces besieged for months in one of the bloodiest fronts of the civil war. Al-Arabiya TV showed footage of Qaddafi's bloodied body carried on the top of a vehicle surrounded by a large crowd chanting, "The blood of the martyrs will not go in vain."

A cell phone picture reportedly taken in Sirte apparently shows Qaddafi covered in blood after being dragged through the streets.

Imad Moustaf, a rebel fighter who said he witnessed Qaddafi's death, told GlobalPost's James Foley that Qaddafi was shot in the head and near his heart on the outskirts of Sirte. Moustaf said the former leader had been hiding in a hole surrounded by bodyguards.

Another fighter told the BBC that Qaddafi yelled out "don't shoot" after being discovered.

According to the Telegraph's Ben Farmer, who has been to the site in Sirte where Qaddafi was found, Qaddafi and his bodyguards had taken refuge in a drain after their convoy was struck by a NATO airstrike and were discovered there by TNC fighters.

NATO did acknowledge it hit a convoy of Qaddafi's loyalists fleeing Sirte on Thursday morning but had not confirmed whether the ousted Libyan leader was in the convoy or had been possibly killed or captured.

Secretary of State Hillary Clinton, speaking from Afghanistan, told CBS News correspondent Whit Johnson that the capture Qaddafi would be a significant development in Libya, but also said she did not expect his capture would end the fighting there.

Clinton spoke before the U.S. was informed that Qaddafi had been confirmed dead.

Celebratory gunfire and cries of "Allahu Akbar" or "God is Great" rang out across the capital Tripoli. Cars honked their horns and people hugged each other. In Sirte, the ecstatic former rebels celebrated the city's fall after weeks of bloody siege by firing endless rounds into the sky, pumping their guns, knives and even a meat cleaver in the air and singing the national anthem.

Libya's new leaders had said they would declare the country's "liberation" after the fall of Sirte.

The death of Qaddafi adds greater solidity to that declaration.

It rules out a scenario that some had feared — that he might flee deeper into Libya's southern deserts and lead a resistance campaign against Libya's rulers. The fate of two of his sons, Seif al-Islam and Muatassim, as well as some top figures of his regime remains unknown, but their ability to rally loyalists would be deeply undermined with Qaddafi's loss.

Information Minister Mahmoud Shammam said he was told that Qaddafi was dead from fighters who said they saw the body.

"Our people in Sirte saw the body," Shammam told The Associated Press. "Revolutionaries say Qaddafi was in a convoy and that they attacked the convoy."

By Tuesday, fighters said they had squeezed Qaddafi's forces in Sirte into a residential area of about 700 square yards but were still coming under heavy fire from surrounding buildings.

In an illustration of how heavy the fighting has been, it took the anti-Qaddafi fighters two days to capture a single residential building.

Reporters at the scene watched as the final assault began around 8 a.m. Thursday and ended about 90 minutes later. Just before the battle, about five carloads of Qaddafi loyalists tried to flee the enclave down the coastal highway that leads out of the city. But they were met by gunfire from the revolutionaries, who killed at least 20 of them.

The Misrata Military Council, one of the command groups, said its fighters captured Qaddafi.

Another commander, Abdel-Basit Haroun, said Qaddafi was killed when the airstrike hit the fleeing convoy.

One fighter who said he was at the battle told AP Television News that the final fight took place at an opulent compound for visiting dignitaries built by Qaddafi's regime. Adel Busamir said the convoy tried to break out but after being hit it turned back and re-entered the compound. Several hundred fighters assaulted.

"We found him there," Busamir said. "We saw them beating him (Qaddafi) and someone shot him with a 9mm pistol ... then they took him away."

Military spokesman Col. Ahmed Bani in Tripoli told Al-Jazeera TV that a wounded Qaddafi "tried to resist (revolutionary forces) so they took him down."

"I reassure everyone that this story has ended and this book has closed," he said.

After the battle, revolutionaries began searching homes and buildings looking for any hiding Qaddafi fighters. At least 16 were captured, along with cases of ammunition and trucks loaded with weapons. Reporters saw revolutionaries beating captured Qaddafi men in the back of trucks and officers intervening to stop them.

In the central quarter where Thursday's final battle took place, the fighters looking like the same ragtag force that started the uprising eight months ago jumped up and down with joy and flashed V-for-victory signs. Some burned the green Qaddafi flag, then stepped on it with their boots.

They chanted "Allah akbar," or "God is great" in Arabic, while one fighter climbed a traffic light pole to unfurl the revolution's flag, which he first kissed. Discarded military uniforms of Qaddafi's fighters littered the streets. One revolutionary fighter waved a silver trophy in the air while another held up a box of firecrackers, then set them off.

"Our forces control the last neighborhood in Sirte," Hassan Draoua, a member of Libya's interim National Transitional Council, told The Associated Press in Tripoli. "The city has been liberated."