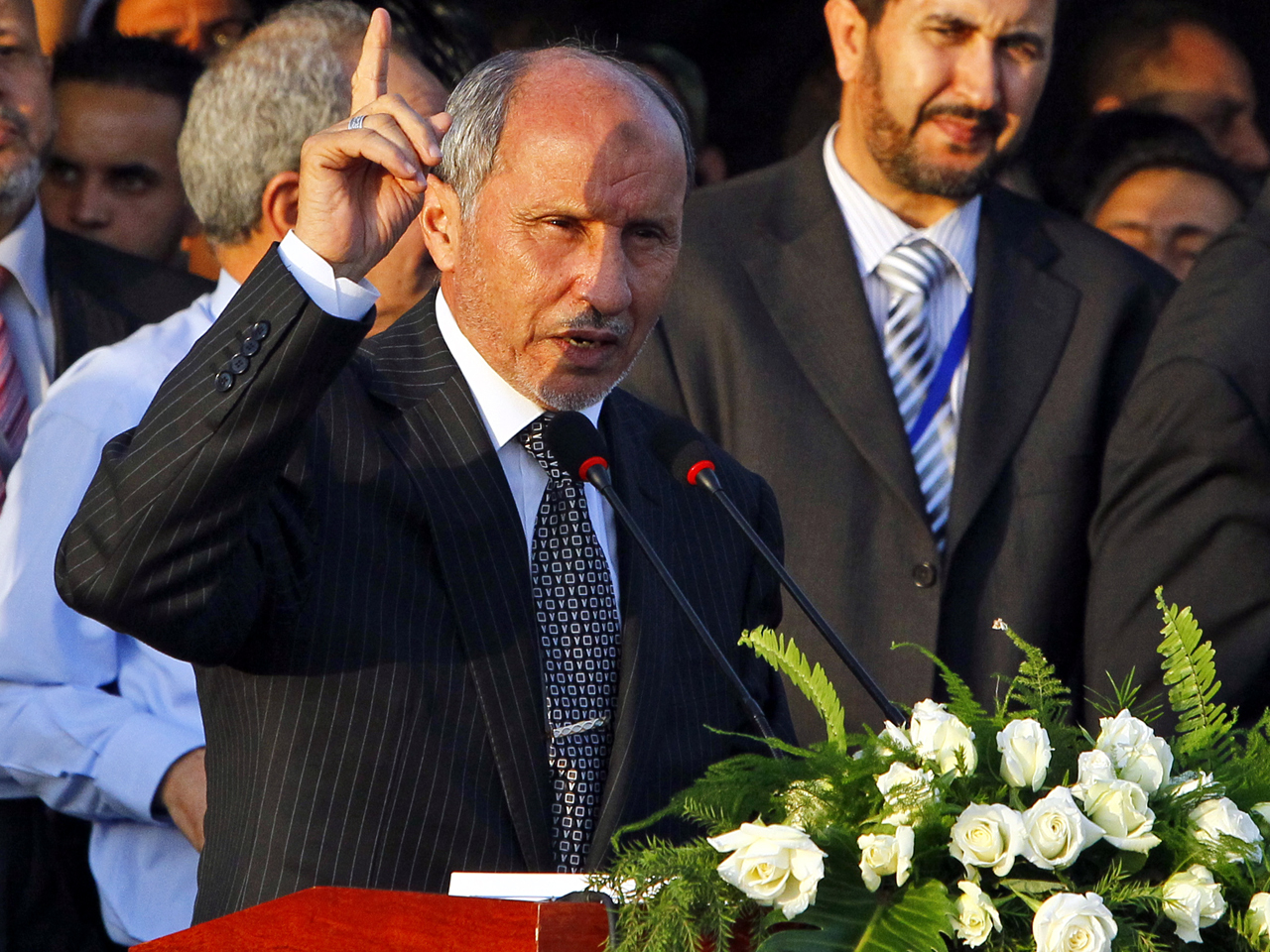 TRIPOLI, Libya - Libya's interim leader said Monday he has ordered an investigation into Muammar Qaddafi's death in response to strong international pressure to determine how the ousted leader was killed by a bullet to the head shortly after he was captured alive.

Mustafa Abdul-Jalil told a news conference in the eastern city of Benghazi that the Transitional National Council has formed a committee to investigate Thursday's killing amid conflicting reports of how the dictator who ruled Libya for 42 years died. Government officials have said initial findings suggest Qaddafi was killed in the crossfire as his supporters clashed with revolutionary forces seizing control of his hometown of Sirte.

But Abdul-Jalil raised a new possibility on Monday, suggesting that Qaddafi could have been killed by his own supporters to prevent him from implicating them in past misdeeds under his regime.

"Let us question who has the interest in the fact that Qaddafi will not be tried. Libyans want to try him for what he did to them, with executions, imprisonment and corruption," he said. "Free Libyans wanted to keep Qaddafi in prison and humiliate him as long as possible. Those who wanted him killed were those who were loyal to him or had played a role under him, his death was in their benefit."

Special Section: Anger in the Arab World
A morbid cleanup left in Libya
Libya declares itself liberated from Qaddafi

While the ruling government put on a united show in public during Sunday's official liberation ceremony, behind the scenes there are disputes over what to do with Qaddafi's body, CBS News correspondent Elizabeth Palmer reports.

The body of the former leader was back on grisly display for another day in the old meat locker in Misrata, Palmer reports.

On Sunday, a local fighting unit held a press conference with Qaddafi's boots, golden gun, assault rifle and satellite phone as props, Palmer reports. They declared they'd done their best to keep him alive after his capture.

But new cell-phone video keeps appearing suggesting otherwise, Palmer reports. There's proof he was badly roughed up. In one video, a rebel, apparently on the scene, indicates to the camera, "Here's the man who killed Qaddafi." The autopsy only says that he died of a gunshot wound to the head.

Of course, there is the possibility that, if Qaddafi was executed and his killer were identified, that person would become a national hero and nearly impossible to prosecute, Palmer reports.

The U.S., Britain and international rights groups have called for an investigation into whether Libya's former rebels killed a wounded Qaddafi after pulling him out of a drainage pipe in his hometown of Sirte, the last city to fall to revolutionary forces after an 8-month civil war.

Critics also have said the gruesome spectacle of his blood-streaked body laid out as a trophy for a fourth day of public viewing in a commercial freezer raises questions about the new leadership's commitment to the rule of law.

Abdul-Jalil said the transitional government has established a committee to determine what ultimately to do with Qaddafi's body and the decisions will be governed by a fatwa, or religious edict, by the head of the Islamic Fatwa society.

Libya's revolt erupted in February as part of anti-government protests spreading across the Middle East. But Libya's struggle has been the bloodiest so far in the region. Mass protests turned into a civil war that killed thousands and paralyzed the country. Qaddafi loyalists held out for two more months after the fall of the capital of Tripoli in late August.

Abdul-Jalil declared the country liberated on Sunday, launching the oil-rich nation on what is meant to be a two-year transition to democracy. But he also laid out plans with an Islamist tone that could rattle their Western backers. He said Islamic Sharia law would be the "basic source" of legislation, and that existing laws that contradict the teachings of Islam would be nullified.

Using Sharia as the main source of legislation is stipulated in the constitution of neighboring Egypt. Still, Egyptian laws remain largely secular as Egypt's interpretation of Sharia does not cover all aspects of modern life, while Saudi Arabia and Iran apply much more strict interpretations.

Abdul-Jalil also outlined several changes to align with Islamic law such as banning banks from paying interest and lifting restrictions on the number of wives Libyan men can take. The Muslim holy book, the Quran, allows men up to four wives.

Mindful of the concern, Abdul-Jalil said Monday he was referring to a temporary constitution and said he wanted to "assure the international community that we as Libyans are moderate Muslims."

He also said there will be a referendum on a new constitution after it is drawn up.

Islamist groups stand to gain ground in neighboring Tunisia and Egypt as well, after they shook off longtime dictators.

Libyan leaders have said they will form a new interim government within a month of liberation and hold elections for a constitutional assembly within eight months after that.

Concern about human rights violations clouded the declaration of liberation by Libya's new leaders on Sunday.

The New York-based Human Rights Watch warned Monday of a "trend of killings, looting and other abuses" by those who fought Qaddafi after finding 53 decomposing bodies, apparently of Qaddafi loyalists, some of whom it said may have been executed by revolutionary forces.

The bodies were found on the lawn of the abandoned Mahari hotel in Sirte, and some had their hands bound. HRW researcher Peter Bouckaert said the hotel had come under the control of fighters from Misrata before the killings took place.

The condition of the bodies suggested the men were killed between Oct. 15-19, the group said. Bloodstains on the grass and spent cartridges indicated some were shot and killed at the spot they were discovered.

"This latest massacre seems part of a trend of killings, looting, and other abuses committed by armed anti-Qaddafi fighters who consider themselves above the law," Bouckaert said in a statement. "It is imperative that the transitional authorities take action to rein in these groups."

The group called on Libyan authorities to conduct an immediate investigation.

Rebel fighters in Misrata — a city which had been besieged by Qaddafi loyalists for weeks in the spring, coming under heavy shelling at the time — had no immediate comment.

Qaddafi's death paved the way for the liberation declaration, but it remains unclear what happened in his final moments.

Jibril Othman, a Libyan fighter involved in the capture, said late Sunday that when he and others placed Qaddafi in an ambulance, the former dictator had not yet suffered what Libya's chief pathologist said was a fatal gunshot to the head.

Omar al-Shibani, a commander at the scene, told a news conference that Qaddafi had been bleeding from the head and the abdomen when he was pulled out of the pipe, but that it was unclear whether the head wound was from a gunshot.

One Qaddafi son, Muatassim, also was killed, but the former leader's one-time heir apparent, Saif al-Islam, apparently escaped with some of his supporters.