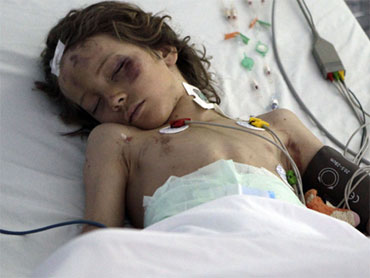 Still groggy from surgery, the Dutch boy who was the sole survivor of a Libyan plane crash that killed 103 people greeted an aunt and uncle with a smile Thursday after they rushed to his hospital room from Holland.

But a Dutch Foreign Ministry official said 9-year-old Ruben van Assouw still may not realize the full extent of his loss because he has not yet been told his parents and older brother were killed in the crash on Wednesday. They were returning home from a family vacation in South Africa to celebrate the parents' 12 1/2-year wedding anniversary - a Dutch tradition.

"He's awake. He's talking. He is listening," the official, Ed Kronenburg, told The Associated Press after visiting Ruben in the hospital. "Of course he also sleeps quite a lot because he got anesthesia yesterday and is still a bit dizzy," he added.

"He hasn't been told yet, as far as we know, that his parents died."

Rescuers found Ruben still strapped into his seat at one end of a large debris field after Wednesday crash as the plane was landing in the Libyan capital Tripoli, said Libyan safety official Col. Baloul Al-Khoja.

Khoja said Ruben was semi-conscious and unresponsive, bleeding moderately from the wounds to his legs. As they began moving him around, the shock began to wear off and he felt the pain in his legs, but he did not cry a lot.

Ruben was found about half a mile from a big piece of the tail section, indicating he may have been sitting in the front of plane when it shattered into pieces.

The plane impacted in a large sandy lot before the runway, leaving a long, narrow trail of wreckage, more than 150 meters and about 25 meters wide. The tail, with its colorful Afriqiyah logo, is the largest piece of wreckage, surrounded by shredded plan parts and scattered personal effects.

A romance novel," Zoete Tranen," Dutch for "Sweet Tears," lies open on page 225. Scattered in the dirt are a charred boot, a black high-heeled shoe, a vinyl motorcycle jacket decorated with Marlboro and Ferrari logos. A milk carton dribbles it contents into the sand. A carcass of a dog buzzes with flies.

No crater or gouge in the earth is visible. Near the start of the wreckage trail is a car completely crushed. Trees off to the side have been shredded to chunks of wood.

The wall of a house on the edge of the lot is pockmarked by debris. Its owner, 54-year-old Ramadan al-Seid, said he and his family heard the crash and when they looked out the window saw a mass of smoke and dust, with an overwhelming smell of fuel. Then they heard the ambulances coming.

Kronenburg said Ruben's mother, father and older brother Enzo, 11, all apparently died in the crash an Afriqiyah Airways flight as it was arriving in the Libyan capital Tripoli from Johannesburg, South Africa. The cause of the crash is not yet known.

Kronenburg, the permanent undersecretary of the Dutch Foreign Affairs Ministry, said Ruben's aunt, Ingrid van Assouw, and an uncle, Jeroen van der Sande, visited him Thursday at the hospital after flying in from Holland.

He said he could not officially confirm their deaths yet "but I think it's quite likely that his parents and his brother perished."

He said he visited the boy after he had 4 1/2 hours of surgery on his leg fractures.

"I spoke to the doctors who are treating him and they are very satisfied about his condition. Actually, I've seen for myself that he's ok."

Dr. Hameeda al-Saheli, the head of the pediatric unit at the hospital where the boy is being treated, said he is breathing normally and his vital organs are intact. She told the official Libyan news agency he suffered four fractures in his legs and lost a lot of blood, but his neck, skull and brain were not affected and he did not suffer internal bleeding.

Libyan television showed images of Ruben Wednesday laying on a hospital bed after the crash, breathing through an oxygen mask with his head bandaged and face bruised and swollen.

Dutch officials said Ruben could be flown back to Holland as early as this weekend.

The Dutch Foreign Ministry said the boy is from the southern city of Tilburg in the Netherlands. A bouquet of white flowers, the traditional color for mourning, was propped against the door of the van Assouw family home - a two-story brick town house with white curtains covering the windows in a quiet neighborhood of Tilburg, 70 miles (115 kilometers) south of Amsterdam.

(AP Photo/Andrew Medichini)
A woman, left, identified by Dutch foreign ministry staff as the aunt Ingrid of Ruben van Assouw, the 9-year-old child sole survivor of the Afriqiyah Airways Flight 771 plane crash, holds a bunch of flowers she just received from a delegation of young Libyan boy scouts, at the al-Khadra hospital in Tripoli, Libya Thursday, May 13, 2010.

The Airbus A330-200 was completing a more than seven-hour flight across the African continent from Johannesburg when it crashed. More than half of the crash victims were Dutch tourists who had been vacationing in South Africa.

Transportation Minister Mohammed Zaidan told The Associated Press that a joint investigation into the cause of the crash was under way involving investigators from the United States, France, South Africa, the Netherlands and Libya.

He said the two black boxes recovered from the crash site had been turned over to the team but he wouldn't comment further pending the investigation's completion.

Peter Goelz, a former managing director of the National Transportation Safety Board, says even a cursory analysis of video showing the debris field indicates the Afrikiyah Airbus must have slammed into the ground at a very high speed.

Goelz tells CBS "Early Show" co-anchor Harry Smith that much of the investigators' attention will be directed at the flight crew, "what they were paying attention to" in the final moments of the ill-fated flight, and "were they paying attention to the right things."

The flight data recorders will shed much light on that aspect of the investigation, says Goelz.

He added that, while Tripoli's airport doesn't boast the latest in aviation equipment, flights in and out have operated safely for years, and the specific Airbus A330 in question had recently passed an inspection and had a clean safety record. The A330, in general, "has a solid safety reputation," he said.

Officials also had no immediate explanation for how the boy survived the crash that killed everyone else on the plane.

But there have been at least five cases this decade of a single survivor in a commercial plane crash. Last summer, a young girl was found clinging to wreckage 13 hours after a plane went down in the water off the Comoros Islands.

It said the passengers included 58 Dutch, six South Africans, two Libyans, two Austrians, one German, one Zimbabwean, one French national and two Britons. The nationality of 19 more passengers has yet to be established, it said in a later statement. All 11 crew members were Libyan, it added.

However, the Dutch Foreign Ministry said it now believes 70 Dutch people were among those killed, including 61 who apparently had been booked by two travel agencies.