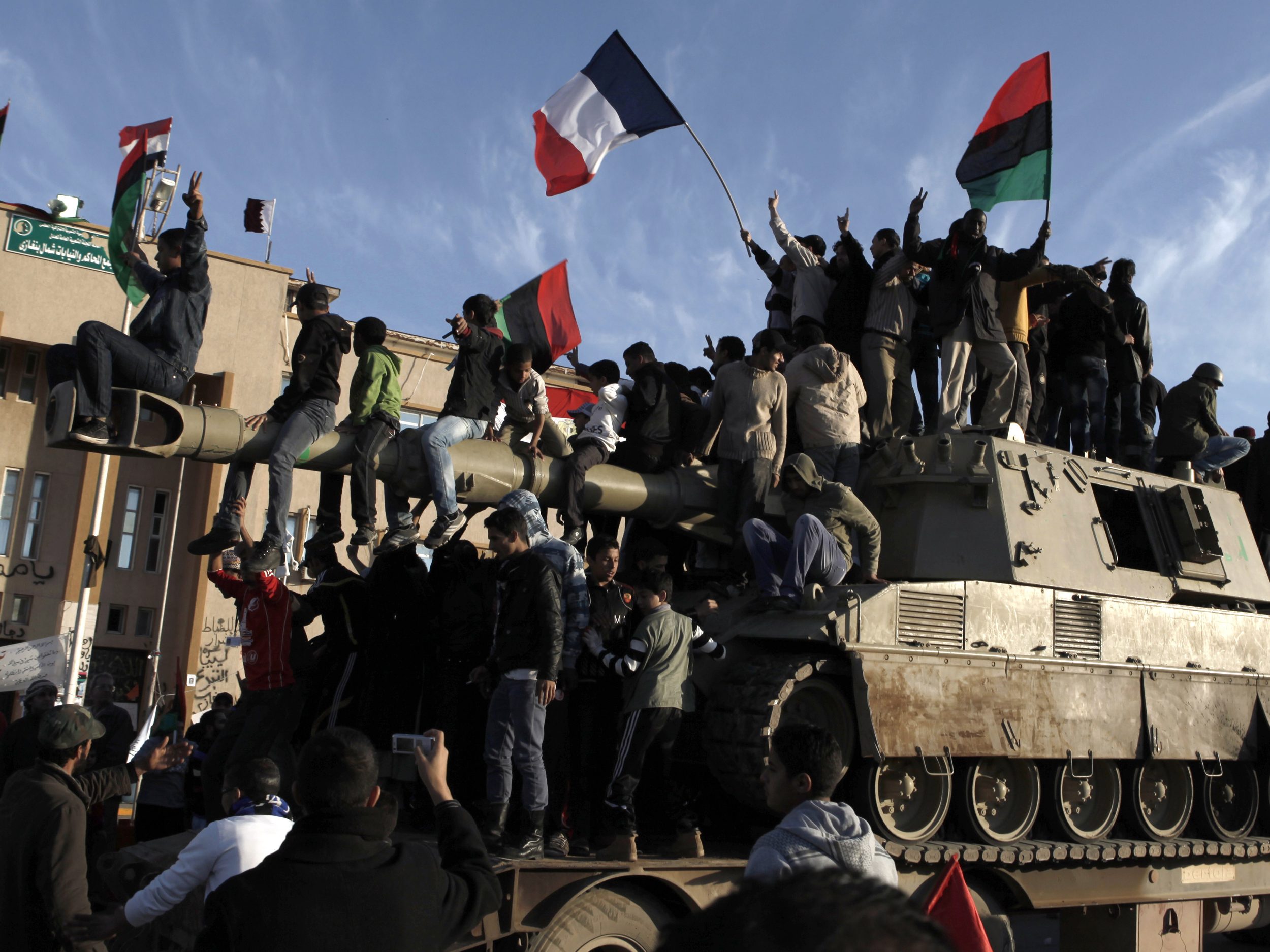 The American role in the three-day old air assault to degrade Libya's military capability has already begun to decline, with the overwhelming share of Monday's missions flown by pilots from other countries in the coalition, said Gen. Carter Ham, U.S. commander in the region . Whereas about 50 percent of the approximately 60 air missions flown on Sunday were by U.S. pilots, the "overwhelming" share were by non-U.S. pilots on Monday, Ham said.

The assault has already shown signs of success too, according to several reports.

Ham said Muammar Qaddafi's forces could already be seen retreating from the opposition stronghold in Benghazi. There have also been no reports of Qaddafi's planes even taking to the air since airstrikes began.

Overall, the coalition operation has succeeded in scattering and isolating Qaddafi's forces after just a weekend of punishing air attacks, Pentagon officials say, and a no-fly zone implemented over the eastern part of the country will be extended to the capital, Tripoli.

Libyan TV reported that Tripoli had come under a new attack by international airstrikes. Anti-aircraft fire erupted in the city several hours after nightfall Monday as television made the announcement. It was not immediately known what the strikes were targeting.

Ham said it was possible that Qaddafi might manage to retain power. "I don't think anyone would say that is ideal," the general said, foreseeing a possible outcome that stands in contrast to President Barack Obama's declaration that Qaddafi must go.

U.S. officials have said repeatedly they do not intend to target Qaddafi directly. The Libyan leader has ruled the North African nation for 42 years and was a target of American air attacks in 1986.

The full dimensions of the Libya crisis still are coming into view, with questions remaining about how far the Obama administration is willing to go to stop Qaddafi, whether the international military coalition will hold together and whether dissent in his own ranks will soon doom Qaddafi.

Traveling in Chile, Obama said a combination of measures including United Nations sanctions designed to isolate the Libyan leader are the correct approach to hastening his fall. Obama added that the U.N. Security Council resolution authorizing military action did not sanction regime change.

"We are going to stick to that mandate," Obama said.

He has little choice if he wants to hold Arab and other backing and hand off front-line responsibility for a no-fly zone to European or other allied warplanes in the coming days.

Discord was evident Monday in Europe over whether the military operation in Libya should be controlled by NATO. Turkey blocked the alliance's participation, while Italy issued a veiled threat to withdraw the use of its bases unless the alliance was put in charge. Germany also questioned the wisdom of the operation, and Russia's Vladimir Putin railed against the U.N.-backed airstrikes as outside meddling "reminiscent of a medieval call for a crusade."

Gates: US to hand off Libya lead in "days"

In Russia for an awkwardly timed visit on other topics, Defense Secretary Robert Gates said it is a mistake to set Qaddafi's ouster as a military goal.

"I think it's pretty clear to everybody that Libya would be better off without Qaddafi," he said in an interview with Interfax news agency. "That is a matter for the Libyans themselves to decide," and given the opportunity they may take it, Gates said.

The direction of the international military campaign is now shifting from crippling Libya's air defenses and halting a Libyan attack on the rebel stronghold in Benghazi to expanding the no-fly zone and setting the stage for a flow of humanitarian supplies to displaced Libyans. The air campaign began Saturday with a barrage of Tomahawk cruise missile attacks by U.S. and British vessels in the Mediterranean.

Attacks were continuing, but on a far smaller scale, Ham and others said. The general made clear that his intention was to stick closely to the limitations of the U.N. Security Council mandate, which set the primary goal of protecting civilians from attacks by the Libyan military. Thus, if Qaddafi's forces should back away from rebel-held areas and fail to demonstrate hostile intent or movement, they would be spared.

"There is no intent to completely destroy the Libyan military forces," Ham said.

A senior defense official, speaking on condition of anonymity to discuss classified data, said the attacks thus far had reduced Qaddafi's air defense capabilities by more than 50 percent. That has enabled the coalition to focus more on extending the no-fly zone, which is now mainly over the coastal waters off Libya and around the city of Benghazi in the east, across the country to the Tripoli area this week.

Ham said there is reason to worry that al Qaeda could use the instability in Libya as an opportunity to establish a foothold there for training and organizing terrorist attacks on American interests. Speaking to reporters at the Pentagon via satellite from his headquarters in Germany, Ham also said the prospect of Qaddafi using surrogates to launch a retaliatory terrorist strike was a "very, very legitimate concern."

One of the more vocal congressional skeptics of the Libya action, Sen. Richard Lugar, called Monday for full debate on the objectives and costs of the conflict and a need for a declaration of war.

"There needs to be a plan about what happens after Qaddafi: who is in charge then, and who pays for this all," said Lugar, a Republican. "With the Arab League having second thoughts and Turkey nixing NATO taking over, there are even more questions. We also have to debate how all this effects the Saudis, Bahrain and Yemen."

Gates, speaking in Saint Petersburg, Russia, said the U.S. military's will at no point include ground forces.

Qaddafi fires back with promise of "a long war"

Ham foresaw potential new complications for the United States and its coalition partners: how to respond in the event that rebel forces seeking Qaddafi's overthrow launch their own offensive in areas where civilians are threatened. Would the U.N. mandate for protection of civilians require coalition attacks on the rebels in that case?

Ham noted that while some of the rebels are ordinary civilians trying to protect their homes, families and businesses from Qaddafi's forces, others have taken up heavy arms and are mobilized in armored vehicles.

"So this will become a particular challenge for us should that eventuality (a rebel offensive) occur," Ham said. He repeatedly stressed that the U.S. military has not intervened and will not intervene on the side of the rebels; he said there has been no military communication or coordination with rebel leaders.