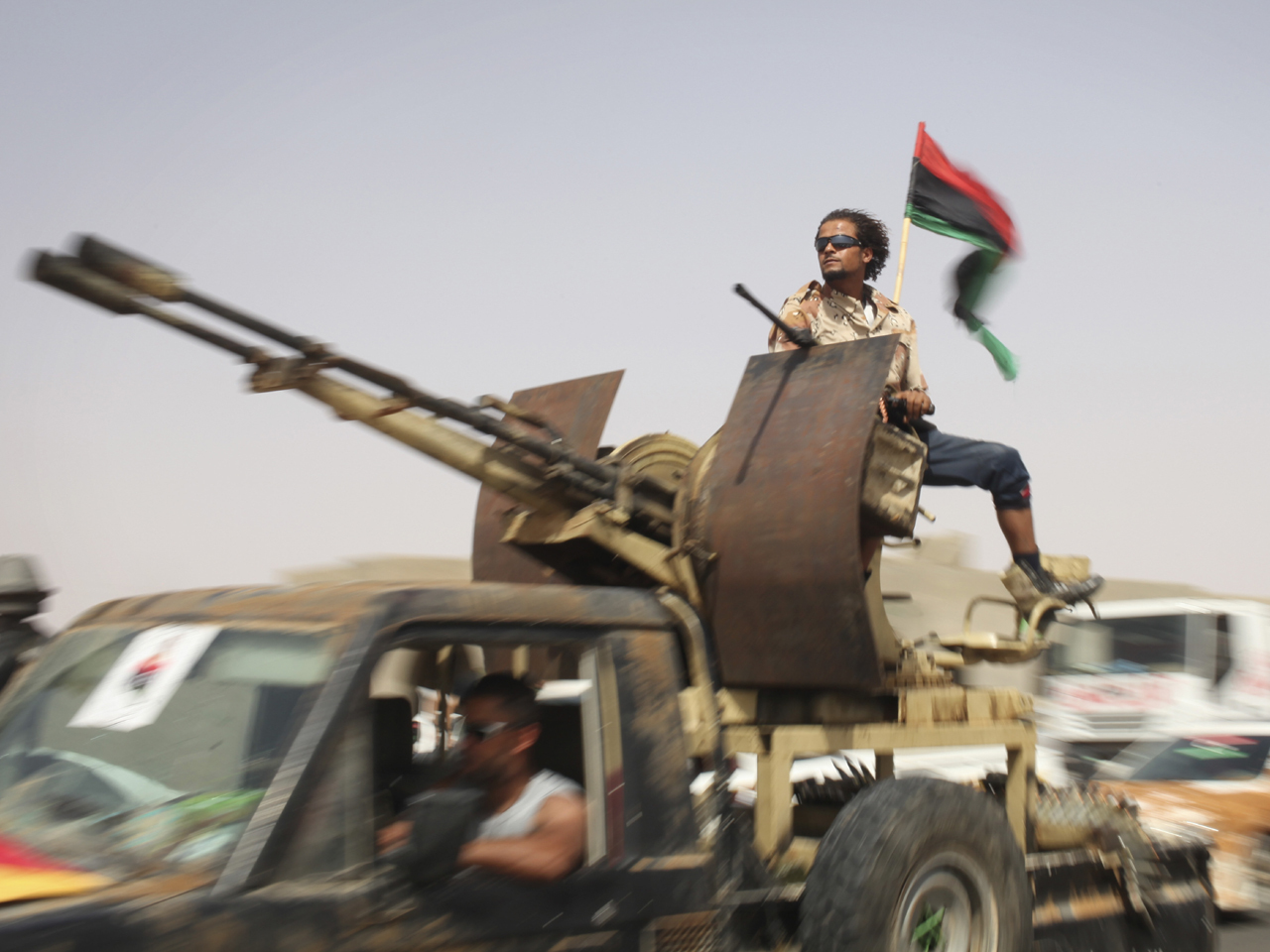 TARHOUNA, Libya - Rebel reinforcements arrived outside one of Muammar Qaddafi's last strongholds in Libya on Monday, even as the forces arrayed against the toppled dictator gave the town a chance to surrender and avoid a fight.

Thousands of rebels have converged on Bani Walid, a desert town some 90 miles southeast of Tripoli. Qaddafi has been on the run since losing his capital last month.

Rebel forces control most of Libya and are setting up a new government. They can't declare total victory, however, until Qaddafi is caught and areas like Bani Walid are subdued, so they have shown they are willing to be patient, perhaps hoping to avoid a bitter inter-clan fight that could create lasting divisions.

CBS News correspondent Barry Petersen, reporting from the side of a road outside Bani Walid, said the rebels understand there are Qaddafi-loyalist snipers in position all over the town, which has had no running water or power to speak of for days, and food is running scarce.

The Rebels say they'd rather not to have to blast their way in, but they're going in one way or another.

The rebels have extended to Saturday a deadline for the surrender of Qaddafi's hometown of Sirte and other loyalist areas, but some have warned they could attack Bani Walid sooner because many prominent former regime officials were believed to be inside.

Petersen says Qaddafi himself was believed to have been in Bani Walid for an undetermined number of days after he fled Tripoli, but the rebels don't believe he is still there. They do hope that capturing the town - one of three still held by regime loyalists - might lead to clues as to where Qaddafi is now.

The scene was calm early Monday, with rebels brewing tea and lighting morning cigarettes, at a checkpoint about 40 miles from Bani Walid's center. Then a convoy of nine trucks flying the independence-era tricolor the rebels have adopted arrived. As his men fired rifles into the air and shouted "God is great!" commander Ismail al-Gitani said they were part of a larger force and that he was ordered to reinforce the northern approaches to Bani Walid.

He refused to say how many fighters he had brought.

"We won't go inside Bani Walid unless the Warfala tribe invites us," he said, referring to Bani Walid's main tribe. "The Warfala have to lead us into Bani Walid. Hopefully no one will be shot. We don't want to use our weapons. But if the Qaddafi loyalists shoot at us, of course we will return fire."

Earlier, another rebel commander at the checkpoint, Mohammed al-Fassi, says the door was still open for negotiations over the town's surrender.

Al-Fassi said the rebels had offered during the negotiations that those "who killed in the name of Qaddafi, whose hands are stained in blood" be placed under house arrest in Bani Walid until a government is formed that can try them.

The rebels have said the hard-core loyalists are a small minority inside the town, but are heavily armed and stoking fear to keep other residents from surrendering. The rebels say Qaddafi does have some genuine supporters in Bani Walid, mainly people linked to the dictator through an elaborate patronage system that helped keep him in power for nearly 42 years.

Qaddafi supporters are "claiming that (rebel) fighters will come and rape their women," said Mubarak al-Saleh, the representative from Bani Walid on the rebels' transitional council.

Some of the rebels on the outskirts of Bani Walid have more reason than most to be impatient. Abdel-Basit bin Balla, a 31-year-old businessman, said he was arrested in Bani Walid during anti-Qaddafi protests in his hometown in May. He was taken to Tripoli's Abu Salim prison, infamous as a detention center for political dissidents.

Bin Balla was freed when rebels took Tripoli, and has joined their forces, though he did not look much like a fighter in his sweat pants and plastic sandals.

"I want to enter Bani Walid with the rebel flag in my hand," he said.

While it is now held by loyalists, Bani Walid also has a history of opposition to Qaddafi. Western diplomats in Libya and opposition leaders abroad reported in 1993 that the air force had put down an uprising by army units in Misrata and Bani Walid. They said many officers were executed and arrested.

NATO has been bombing Qaddafi's forces since March under a United Nations mandate to protect Libyan civilians. But that mandate expires Sept. 27, and the rebels may be eager to end the fight before it runs out — since it may be politically difficult to get it renewed.