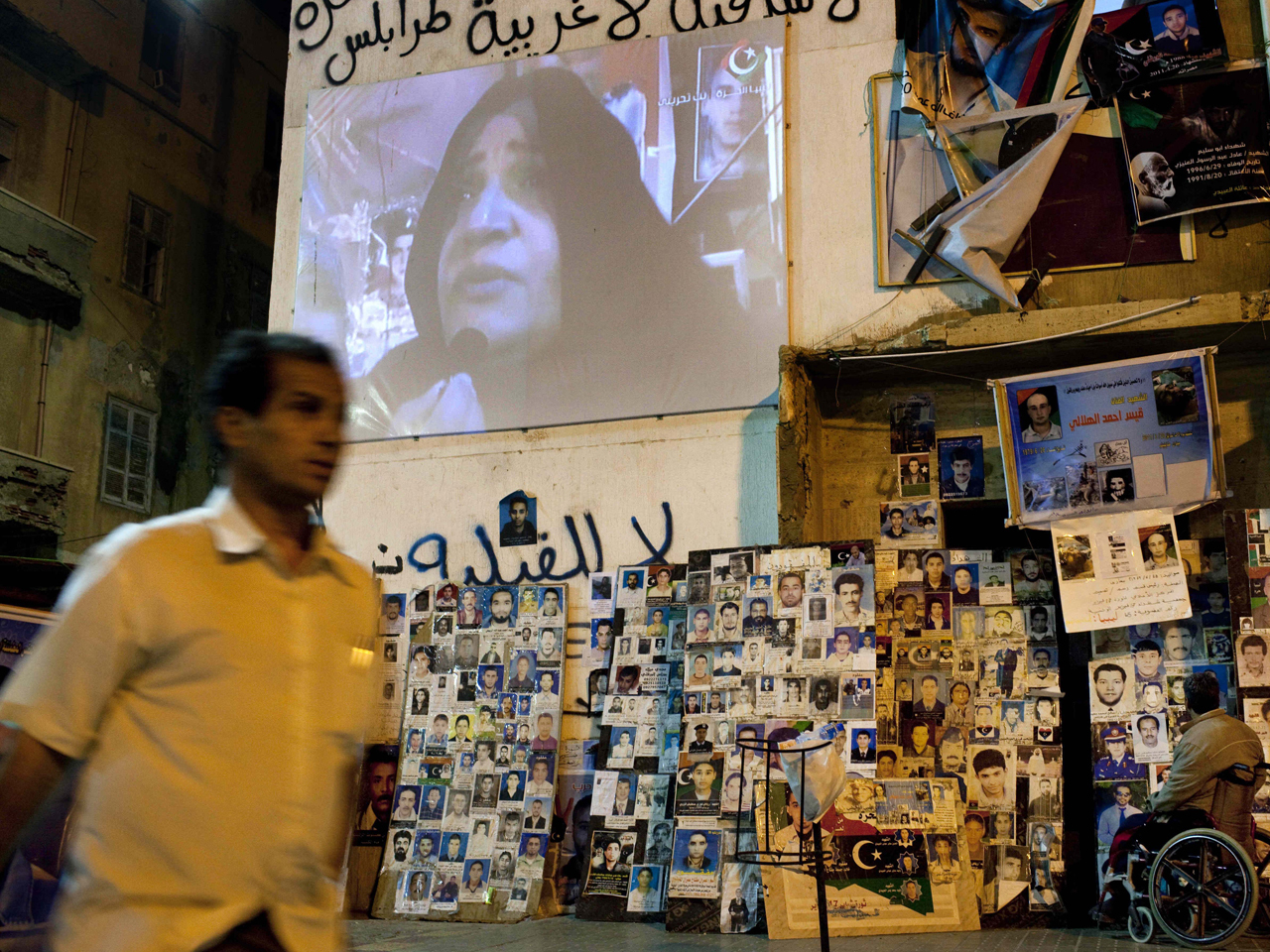 Libya Alhurra, or "Free Libya," began broadcasting Monday night, a major step in the rebels' attempts to get its message to the Libyan public, whose main source of information on the crisis roiling their country has been Qaddafi's TV and radio.

Thousands of Libyans waving flags gathered in a public square in the rebel stronghold of Benghazi to watch the first broadcasts on a large screen, celebrating a newfound freedom from 40 years of media oppression.

"This is freedom. I hope this shows the true color of Libyan people and their real faith in a new, free Libya," station co-founder Zuhair Albarasi told The Associated Press from the square, which has become a rallying point for the revolt against Qaddafi.

The channel was born out of an Internet video streaming site launched by Albarasi and fellow Libyan businessman Mohammed al-Nabbous, who since the uprising began in mid-February searched for a way to show it to the world and to the Libyans themselves.

They started toting video cameras to protests, jerry-rigged a home satellite system and turned to the Web. The danger of their effort was quickly made clear: Al-Nabbous, 27, was killed in Benghazi on March 19, shot under the right eye by a sniper as he filmed rebels armed with rocket launchers preparing to confront Qaddafi's tanks as they approached the city. Benghazi was saved that day by the first international air strikes.

Still, their site continued, streaming video and audio reports direct from the battle front, including audio of fighters and the sounds of whizzing bullets and whooshes of rocket launchers. It also hosts a chat room that draws Libyans inside and outside the country as well as sympathetic foreigners, in English and Arabic.

But in a country where Internet access has been sharply curtailed for much of the population, the channel — hosted on Livestream — remains limited in its reach.

That made it vital to reach satellite TV, which reaches an estimated 90 percent of the Libyan public. The Gulf nation of Qatar, which has been at the forefront of Arab nations assisting the rebels, hosts a pro-rebel Libyan station out of its capital, Doha. But Albarasi and his colleagues in Benghazi were determined to launch one from their nation's soil.

With the channel's airing on Monday, Albarasi paid tribute to his lost friend. "The relaunch of Libya Alhurra is done in his name," he said. "We are all looking forward to providing the people of Libya with a professional and independent service."

Monday night's launch ran late with a procession of proclamations from various rebel and community leaders that might have bored an audience in a free country. But the thousands gathered at newly named Liberation Square remained spellbound, not budging long after midnight to revel in the denunciations of Qaddafi and promises of a better life in a free and democratic Libya.

"This is a victory for freedom of speech. For the first time we can express our opinion. This channel belongs to the Libyan people," said Saiz Mahmoud, a 22-year-old mathematics student.

The rebels acknowledge that in the media war, Qaddafi has the upper hand so far, with his state-run TV and radio reaching across the country, including in the rebel-held east and the opposition's de facto capital, Benghazi.

"Qaddafii's media are very effective," said Albarasi. "We know because a lot of people still believe Qaddafi's propaganda, even here in Benghazi."

Earlier this month, for example, Qaddafi's state TV announced the rebels' administration had received $3 billion to pay salaries, keep utilities running and fund the war. "'Go and get your money,"' Albarasi quoted the announcer as saying.

Within hours, throngs of people converged on banks in Benghazi to try to collect money that wasn't there.

The uprising against Qaddafi's four-decade rule began in mid-February. Qaddafi's military and militias hold the capital, Tripoli, and most areas in the west. The rebel forces are concentrated in the east, with Benghazi as their center, but have been fighting to hold high ridges in a western mountain range as well as the port of Misrata in the west.

Before the uprising, few bothered to watch the several state-run satellite TV stations, which showed only the daily activities of "brother leader" Qaddafi, leavened by badly produced Libyan-made dramas. But now they are drawing audiences with images of buildings in the capital set ablaze by NATO air strikes and appeals to Libyan patriotism to stand together against "the Crusaders," as Qaddafi calls the Western coalition members.

On another front, the rebel administration is fighting to get Qaddafi's channels off the air, arguing they are spreading hatred and inciting violence. The administration has appealed to Egypt-based distributor Nilesat to hand them Qaddafi's frequencies. Nilesat head Ahmed Anis said they're a commercial company and such demands should be taken to Egypt's Foreign Ministry.

The Arab League passed a resolution asking Nilesat to block Qaddafi's TV stations. And at the United Nations, diplomats are working to broaden sanctions on the regime to include shutting down state-run channels.

Albarasi said he is against censorship: "We don't want to forbid Qaddafi's channels, only have the same freedom to voice our views."

In the first days of the uprising, as Qaddafi was claiming he was fighting al Qaeda terrorists and drug addicts, Albarasi and al-Nabbous realized the importance of showing the truth to Libyans and others abroad.

Al-Nabbous brought the satellite dish from his home and, working with volunteers, the two set up cameras and an account with Livestream and began feeding video to the world.

Albarasi, a business administration graduate who works in hotel and oil management, used a video camera to interview protesters and document the heavy weapons the regime turned against unarmed protesters.

"I was scared," Albarasi recalled. "I know what kind of monster Qaddafi is, and Internal Security was watching and filming us," he said.

At first, people thought he was a foreign correspondent.

"When I told them I'm Libyan, this channel is yours, it's ours, our free space where we can express ourselves, people would hug me, crying, kiss my hands," he said. "I was crying myself. They even tore my shirt trying to touch me."