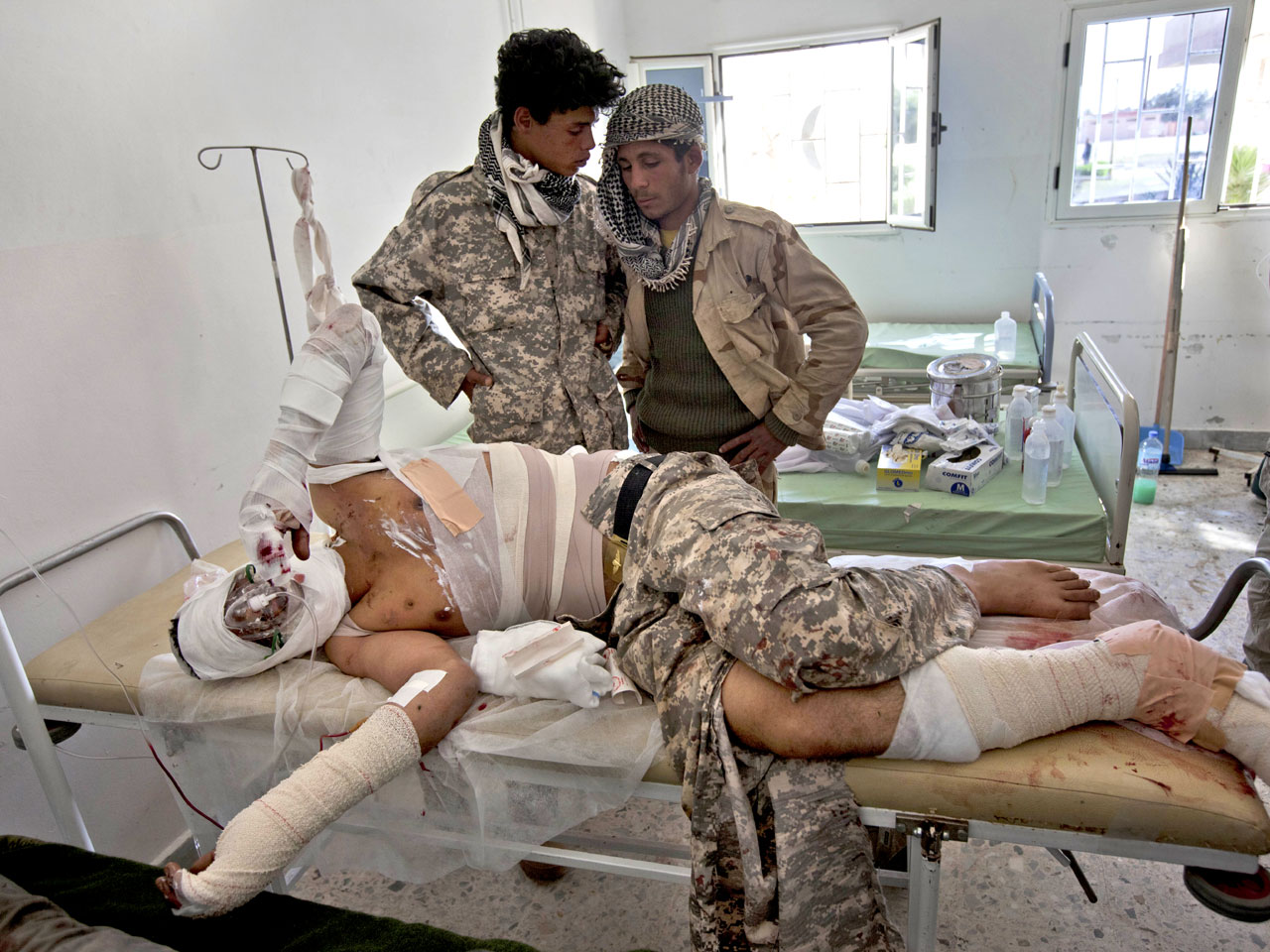 AJDABIYA, Libya (AP) - Muammar Qaddafi's forces poured rocket fire after dawn Saturday into Misrata, the only western city still in rebel hands, and weary residents who have endured more than a month of fighting angrily lashed out at NATO for failing to halt the deadly assault.

Five civilians were killed in a 30-minute barrage of shelling that heavily damaged a factory for dairy products and sent up a thick column of black smoke, a doctor said. A human rights group has accused the Qaddafi regime of using cluster bombs in Misrata - munitions that can cause indiscriminate casualties and have been banned by most countries.

Major General Salah Abdwallah of the Libyan army told CBS News on Saturday that Libya does not have any sort of cluster munitions in its arsenal. He said no Libyan soldier has ever been trained in using cluster munitions and that rebels had either brought in the bombs for propaganda purposes or used them against the government forces.

In eastern Libya, fierce fighting left seven rebels dead, 27 wounded and four missing as the anti-Qaddafi forces sought to push toward the strategic oil town of Brega, according to Mohammed Idris, a hospital supervisor in the nearby city of Ajdabiya. The battle took place on a road halfway between Ajdabiya and Brega.

Frustration was growing among residents in Misrata, where Qaddafi's troops have intensified their long siege of the city in recent days. The doctor sharply criticized NATO for failing to break the assault with its month-old campaign of airstrikes.

"We have not seen any protection of civilians," the doctor said. "NATO airstrikes are not enough, and the proof is that there are civilians killed every day here," he said.

The theme was echoed in the rebel stronghold of Benghazi, where spokesman Abdel-Hafidh Ghoga told a news conference: "There's no more room for hesitation or for not standing with determination against what is happening in Misrata and other Libyan cities, because the destruction that Moammar Qaddafi is causing in Libyan cities is great and extensive."

The doctor said Qaddafi's forces are taking shelter in residential areas that civilians had fled, apparently confident that NATO won't risk attacking them there.

But the troops have so far been unable to fully occupy the city of 300,000 people, he said, so instead they are targeting sites such as the dairy plant or the port to prevent the arrival of humanitarian aid.

The doctor, who spoke on condition of anonymity because he feared government retribution, said a civilian who was brought to him had been nearly torn in half by a mortar shell and was not expected to live.

NATO officials have said it is difficult to strike Qaddafi's forces when in an urban area. NATO did say its strikes on Friday destroyed two tanks in the Misrata area.

Rebel fighters in eastern Libya were less critical of NATO. Mustafa Abdul-Jalil, head of the rebels' National Transitional Council, said this week that without the airstrikes, even Benghazi, Libya's second-largest city and the rebels' main stronghold, would be in "complete danger."

Rebels in Misrata and the New York-based group Human Rights Watch have alleged that Qaddafi's forces have been using cluster bombs, which pose particular risk to civilians because they scatter small bomblets over a wide area. Most of the world's nations have banned the use of the munitions.

Human Rights Watch said its researchers inspected remnants of the weapons found in a Misrata neighborhood and interviewed witnesses.

Late Friday, Libyan government spokesman Moussa Ibrahim denied the use of cluster bombs. "Absolutely not," he said when asked about the allegations. "We can never do this. We challenge them to prove it."

A boat chartered by Doctors Without Borders and carrying 95 Libyans from Misrata - 65 of them injured - arrived Saturday at the Tunisian port of Zarzis, according to the official TAP news agency. Nine people who were critically or seriously injured were taken to a hospital in the town of Sfax.

A lack of medicine, food and water for the 6,000-10,000 people in migrant workers' camps around Misrata has led to a "catastrophic" situation that is deteriorating daily, said Dr. Helmi Makkaoui, a Tunisian coordinator for the humanitarian aid group.

Rebels in eastern Libya held their positions for four days around the city of Ajdabiya, about 30 miles (50 kilometers) to the east, allowing NATO airstrikes to weaken government forces, said Col. Hamid Hassy.

On Friday, the fighters pushed in to reach Brega's university campus, just outside the town's oil port. Hassy said that if rebels retake Brega, they will bring engineers to repair any damage to the refinery and oil facilities there.

The rebels reached the outskirts of Brega, which has already changed hands half a dozen times since fighting began in early March, Hassy said. Explosions that appeared to be from new airstrikes could still be heard Saturday in the area.

Despite the strikes, the rebels ran into staunch resistance Saturday. Three of the six rebels killed were in a car that was struck by either a rocket or artillery shell near a gas station on the road about 24 miles (40 kilometers) from either city, said fighter Ahmed Bakir.

Ambulances streamed to an Ajdabiya hospital, where doctors treated fighters with severe burns or shrapnel wounds. Bloodstained bandages littered the area outside the hospital and workers hosed down a bloody stretcher.

The latest fighting in Brega pushed the rebels back to the town's outskirts, said Suleiman Mohammed Suleiman, one of the opposition fighters who was shot in the leg while firing a heavy machine gun from the back of a pickup truck outside Brega.

Suleiman said the rebels could see Brega but were not yet inside.

The NATO-led air campaign has kept rebels from being defeated on the battlefield by the better trained and equipped government forces, but it still has not been enough to completely turn the tide. The rebels have been unable to reach Qaddafi's heavily defended hometown of Sirte, the gateway to the regime-controlled western half of the country.

Previous rebel advances through Brega and its companion oil center of Ras Lanouf, another 60 miles (100 kilometers) farther on, have ultimately foundered as rebels overextended their supply lines and were routed by the heavier firepower and more sophisticated tactics of the government forces.

In contrast those previous charges and retreats in the past six weeks, the rebels appear to be trying a more gradual advance that might actually result in them holding territory.

At a two-day meeting of NATO foreign ministers in Berlin, the United States and its allies put up a united front on the goals of the alliance's stalemated military mission in Libya, yet failed to resolve behind-the-scenes squabbling over how to achieve them.

NATO members agreed on paper that Qaddafi had to go to end the crisis, they also made clear that they would not be the ones to oust him.