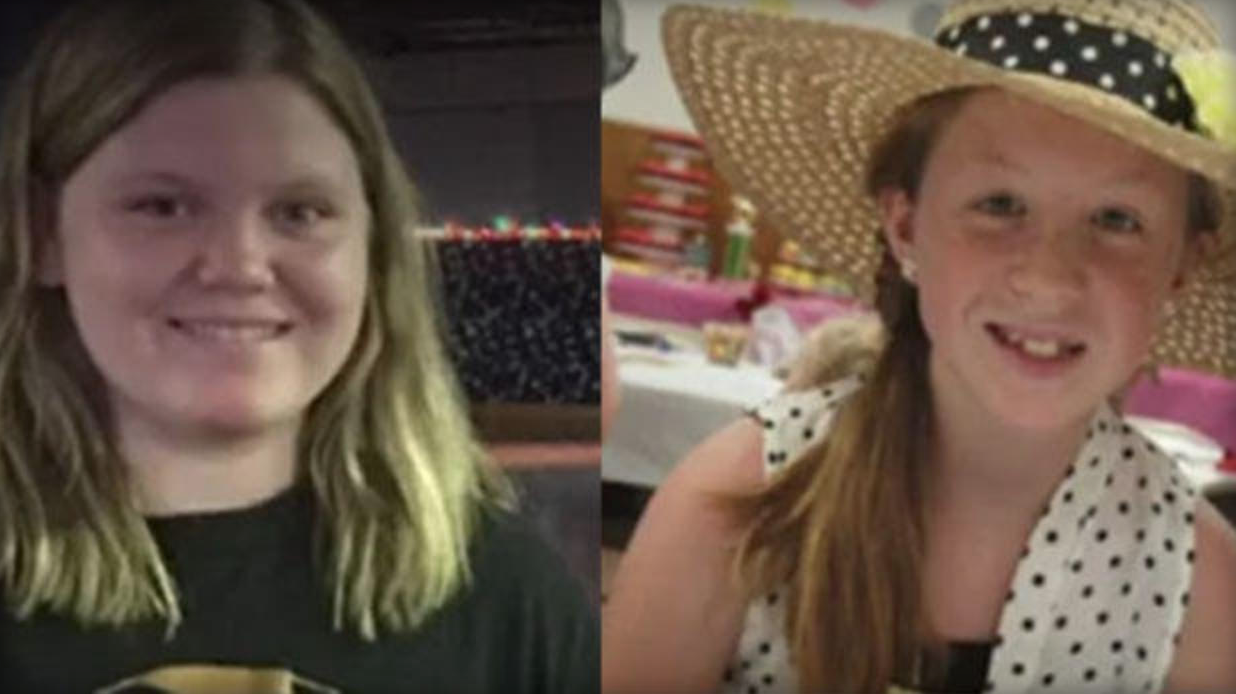 DELPHI, Ind. -- Two bodies found along a northern Indiana stream are those of two teenage girls who went missing Monday and their deaths are being investigated as homicides, authorities said on Wednesday.

State Police Sgt. Kim Riley said autopsies performed Wednesday determined that the bodies are those of Liberty German, 14, and Abigail Williams, 13, both of Delphi.

Their bodies were found Tuesday afternoon along Deer Creek near Delphi, about 60 miles northwest of Indianapolis. Police said the girls’ bodies were about three-quarters of a mile from an abandoned railroad bridge where they were dropped off Monday to go hiking.

Police released a photo of a man taken on the Delphi Historic Trails on Feb. 13, around the time Abigail Williams and Liberty German were walking, CBS affiliate WTTV reports.

Riley said authorities are not yet releasing the girls’ cause or manner of deaths, citing the ongoing double homicide investigation.

“The investigation is still in its baby steps, so to speak, and we don’t want to put that information out yet,” he said during a news conference in Delphi.

Carroll County Sheriff Tobe Leazenby said authorities do not yet have a suspect or suspects in the girls’ slayings.

Delphi is known for its historic courthouse square and a restored section of the historic Wabash & Erie Canal that offers trips on a replica 19th century canal boat.

News of the girls’ deaths shook the community of 3,000 residents, where the teens were both eighth-graders at Delphi Community Middle School.

Greg Briles, the superintendent of Delphi Community School Corporation, called their deaths a “senseless tragedy” in a Wednesday afternoon tweet. “Our worst fears were confirmed today in the senseless loss of our 2 DCMS students,” he wrote on Twitter.

Delphi resident Richard Gardiner said Wednesday after the police announcement that the girls’ killings had left him and other residents stunned.

“I’ve lived around this town for 50-plus years and things like this are happening every day in bigger cities, like Chicago and Indianapolis and what not,” he told WLFI-TV. “And in a small community when it happens, everybody goes berserk.”

A local publication, the Carroll County Comet, reported in January that German and Williams were both honor roll students in the fall semester.

German’s Facebook page includes several photos of her clowning around with friends, including one from November showing her and another girl flashing the peace sign, prompting one Facebook friend to comment, “You goofy girls.”

Leazenby and Riley urged the public, particularly people who were hiking Monday in the area where the girls went missing, to contact police with any tips they might have to help authorities in the investigation. Authorities also released two photos of a male who was seen on hiking trails around the time the girls were there and asked the public to help identify him so he could be questioned about what he might have seen.

“We’re going to get to the bottom of this. We feel confident. And we’re going to do everything within our resources to reach justice in this situation,” Leazenby said.

Riley said the girls’ bodies were found in a wooded area about 50 feet from the banks of Deer Creek in an area less than a mile upstream from the railroad bridge that’s known locally as the Monon High Bridge.

He thanked volunteers who helped search the base of the bridge and surrounding trails for the girls, whose bodies were found by one of those volunteers.

The girls were reported missing Monday evening after they failed to appear at a predetermined meeting place. Riley said a relative of one of the girls dropped them off Monday near the bridge and another relative had agreed to pick them up later. He said the girls went hiking Monday because the school they attended did not have classes that day.

Riley said the girls planned to hike a local trail, and authorities have received no information suggesting they planned to meet anyone else on that trail.

He said authorities are urging local residents to use caution, keep track of their children and report anything unusual to authorities while the criminal investigation continues.

“There’s somebody out there, somewhere. We don’t know if it’s a person who came in and left, or if it’s somebody in the neighborhood,” Riley said.