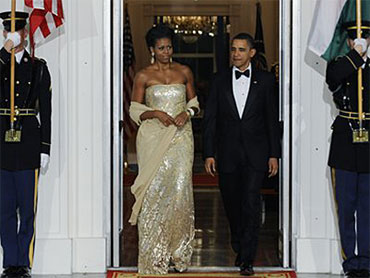 One of the great symbols of our country, the Liberty Bell, is on the move this morning. The 250-year-old icon is being rolled on a specially designed cart from the small pavilion that it has called home since 1976 to the new $12 million Liberty Bell Center closed by.

The 963-foot journey is expected to take at least four hours. Reporter Natasha Brown of CBS Philadelphia station WYW-TV, reports on The Early Show the move was going as planned starting at 7:04 a.m.

Brown explains the bell is only moving a few feet at a time because at every stop, there are several historical vignettes and dramatic re-enactments to explain the history of the bell.

After a town crier rang his bell and said "Oye, oye, clear the way for liberty. Let freedom ring. Let freedom ring," five men wearing hard hats pulled and pushed the bell, mounted on a specially designed wheeled crate, from a wooden platform outside the pavilion onto a path to its destination.

Re-enactors dressed as historic figures including Benjamin Franklin, Thomas Jefferson, Frederick Douglass, and Susan B. Anthony are to accompany the bell on its journey, performing dramatic vignettes from different periods of history along the way. Other vignettes will feature Native Americans, civil rights activists and recent immigrants.

The bell is expected to arrive to its new home at the Liberty Bell Center at noon; it is all part of a sweeping $314 million transformation of Independence Mall.

The bell is being pushed very carefully by hand. The movement and condition of the bell is electronically monitored through special sensors, said Andrew Lins, chairman of the conservation department of the Philadelphia Museum of Art. Lins said the bell would be strapped to the ends of the cart to prevent it from swaying.

Phil Sheridan, spokesman for Independence National Historical Park, said the move to a new location was necessary to provide space for displays and exhibits around the bell.

"We're very confident that we can move the bell safely" and securely, Sheridan said.

At a dry run of the procession two weeks ago, a forklift carrying a deadweight equivalent to the bell rolled over a drain cover and broke it, making a "loud crunching noise," said Karie Diethorn, chief curator of the park. The forklift has been abandoned, and planners have continued to tinker with some of the details.

"Part of the whole process of designing the move for the bell was to experiment with a variety of options - what would us the best preservation of the bell and be the most efficient" to transport it, Diethorn said.

The move comes three months after a mishap at the National Constitution Center, whose dedication ceremony was marred when a 650-pound frame fell over, slightly injuring five people and narrowly missing the guest of honor, Supreme Court Justice Sandra Day O'Connor.

The controversy around the bell is not just about the move in terms of the security in the new neighborhood in which it will be housed, but in terms of historical recognition of some people who live near the new home of the bell.

Brown reports she has heard from a group of African-Americans in the area who consider the spot where the new Liberty Bell Center hallowed ground because it was the slave quarters of George Washington that was built there on this particular piece of land so they consider it sacred ground. She says the group wanted to preserve the land so a compromise is in the works with the National Park Service.

There will be exhibits inside the Liberty Bell Center addressing slavery and its role in our history.

The 2,080-pound bell was delivered to Philadelphia in 1752 and hung in the Pennsylvania State House, later Independence Hall, starting in 1753 before being moved to the Liberty Bell Pavilion for the bicentennial in 1976.

The pavilion and the new center are located only 300 feet apart, but the procession is designed to travel across the flattest terrain possible and generate public attention.

Facts about the Liberty Bell: