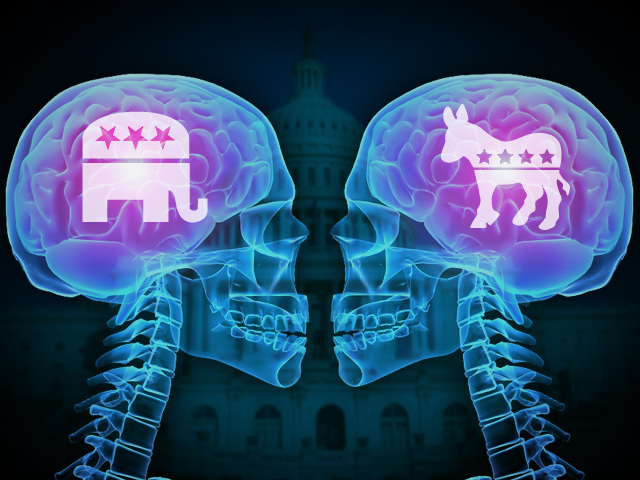 (CBS) Are political leanings hard-wired into the brain? That's the suggestion of a new study that reveals striking anatomical differences between the brains of liberals and those of conservatives.

The brains of people who call themselves liberals tend to have larger anterior cingulate cortexes than the brains of people on the opposite side of the political spectrum, the study showed. The anterior cingulate cortex is a collar-shaped region around the corpus collosum, a structure that relays signals between the right and left hemispheres of the brain.

What about conservatives? Their brains brains tend to have larger amygdalas. The amygdala is an almond-shaped structure located deep within the brain.

Based upon what brain scientists know about the function of the two brain regions, researchers believe the structural differences support the notion that liberals are better equipped to make sense of conflicting information while conservatives are better able to recognize a threat.

"Previously, some psychological traits were known to be predictive of an individual's political orientation," study author Dr. Ryota Kanai of University College London Institute of Cognitive Neuroscience, said in a written statement. "Our study now links such personality traits with specific brain structure."

For the study, published in the April 7 issue of the journal Current Biology, 90 healthy young people underwent MRI scans and completed questionnaires designed to determine their political leanings on a five-point scale - from very liberal to very conservative.

The study was undertaken following several previous reports showing that conservatives are more sensitive to feel threatened or anxious in the face of uncertainty, while liberals tend to be more open to new experiences - which is just what Kanai's study seemed to confirm.

The study didn't show what causes the structural differences in the first place. Are they set at birth? Do they arise over time as a result of experiences? And what explains people whose political views change over time?

Kanai had a diplomatic answer. "It's very unlikely that actual political orientation is directly encoded in these brain regions," he said. "More work is needed to determine how these brain structures mediate the formation of political attitude."