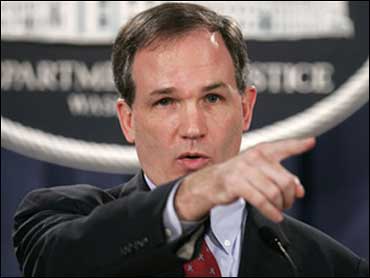 Lawyers for Vice President Cheney's former top aide asked a federal judge Thursday to dismiss his indictment because the special prosecutor in the CIA leak case lacked authority to bring the charges.

In a court filing, lawyers for I. Lewis "Scooter" Libby said his indictment violates the Constitution because Special Counsel Patrick Fitzgerald was not appointed by the president with the consent of the Senate.

The defense attorneys also said Fitzgerald's appointment violates federal law because his investigation was not supervised by the attorney general. They said only Congress can approve such an arrangement.

"Those constitutional and statutory provisions have been violated in this case," Libby's lawyers wrote.

Furthermore, the filing warns that because Fitzgerald acts "without any direction or supervision," he "alone" decides where U.S. interests lie in an investigation involving "national security, the First Amendment, and important political questions."

Fitzgerald was appointed in December 2003 after former Attorney General John Ashcroft recused himself from the investigation because of his close relationships with White House officials. Then-Deputy Attorney General James Comey, acting in Ashcroft's place in the matter, selected Fitzgerald.

Comey gave Fitzgerald sweeping power to conduct the investigation into the leak of CIA operative Valerie Plame's identity, exempting the special counsel from following rules that apply to all U.S. attorneys throughout the nation.

Unlike every other federal prosecutor, Fitzgerald did not have to seek approval from senior Justice Department officials to grant immunity or subpoena reporters and news organizations. Nor did he have to advise senior Justice officials before he sought Libby's indictment.

"The attorney general may delegate powers but he may not abdicate responsibility," Libby's lawyers wrote.

Libby, 55, who resigned as Cheney's chief of staff after he was indicted, is charged with lying about how he learned Plame's identity and when he subsequently told reporters. He faces five counts of perjury, false statements and obstruction of justice.

Plame's identity as a CIA operative was published in July 2003 by columnist Robert Novak after her husband, former U.S. Ambassador Joseph Wilson, accused the administration of twisting intelligence about Iraq's efforts to buy uranium "yellowcake" in Niger. The year before, the CIA had sent Wilson to Niger to determine the accuracy of the uranium reports.

Libby's lawyers warned U.S. District Judge Reggie B. Walton that he may need to require the Justice Department to turn over records — including a secret letter from Comey to Fitzgerald — to determine whether the special counsel's appointment is legal.

CBS News' Beverley Lumpkin says that in his reply to the filing, Fitzgerald will likely make the point that he does, in fact, hold a presidential appointment. Plus, he will emphasize that Comey was acting as Attorney General when he gave Fitzgerald his assignment and that "all falls within the ambit of the Constitution and the powers of the Attorney General."

Defense attorneys and Fitzgerald will appear in U.S. District Court Friday to argue over defense requests for classified records and evidence gathered by the prosecution about reporters who learned about Plame from government officials other than Libby. Lumpkin explains that in those two categories -- records of reporters and classified documents from federal agencies -- "Libby is demanding more than prosecutor Fitzgerald is willing to turn over."

If the case goes to trial, defense attorneys have signaled that Libby likely will testify that he was so busy with national security issues that he forgot or incorrectly recalled conversations he had with reporters about "less important topics," such as Plame.