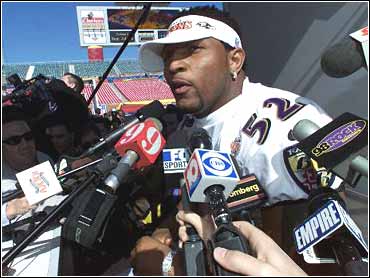 The session began with a wave of reporters and cameramen streaming onto the field at Raymond James Stadium, many making a beeline for the big guy at Station 7.

"Ray Lewis is down there! Hurry up!" said Baltimore Ravens defensive tackle Tony Siragusa, directing the herd filing past him.

And there he was.

Wearing a diamond watch, two loop diamond earrings and a white visor that proclaimed the Ravens AFC champions, Lewis was front and center. He handled media day the way he plays football: confidently, defiantly and always in control.

"The media has been focused on me the whole year," Lewis said. "It hasn't distracted me yet, so it won't right now."

He was peppered with questions by at least 200 people, twice the crowd gathered around any other player. The pack diminished only slightly after it was clear Lewis wouldn't discuss his ordeal of a year ago a double-murder trial in Atlanta.

"Please, let's talk about football," he said, shaking his head after someone asked yet another question about the case.

Lewis made a reference to his trial at the start of the hourlong session, looking directly at his questioners and speaking with the confidence of a man who had nothing to hide.

"What Ray Lewis went through was a year ago. Let it go," he said.

What he went through was this: a much-publicized case in which he was cleared of murder charges in exchange for a guilty plea to obstruction of justice and testimony against his co-defendants, who were found innocent.

Though Ravens coach Brian Billick asked the media the day before to stop pestering Lewis about Atlanta, it didn't stop the queries.

"I'm not there to justify what went on. That's a story in my book that's closed," he declared.

Lewis repeated what he has claimed since his arrest that he was made a scapegoat by Atlanta officials, who weren't really trying to find the real killer.

"The real truth is this was never about those two kids that were dead in the street. This is about Ray Lewis, and that's not right," he said. "Don't be mad at me. The person to be mad at is (prosecutor) Paul Howard, the mayor of Atlanta, the people who never said one time we're going to find out who killed these people. They said we're going to get Ray Lewis."

Then, Lewis tried to change the subject.

"We need to go somwhere else," he said.

It was a request he repeated several times during the session. The throng complied for a minute or two, but the topic always seemed to return to Atlanta.

Someone asked him, directly: Who did it?

At that point, Lewis became more emphatic about his demand to keep the conversation on football.

After someone asked him if he had anything to say to the families of the victims, Lewis replied, "Nah."

Then, after a moment's hesitation, he shook his head and tried again.

When the hour was almost up and it was apparent Lewis indeed had survived media day, Ravens tight end Shannon Sharpe, sitting one station over, looked at his friend and smiled.

"He's handled himself well. Anything less and I've had been upset," Sharpe said. "He never dreaded this because to dread this day, you dread being here in this game. You can't dread that."