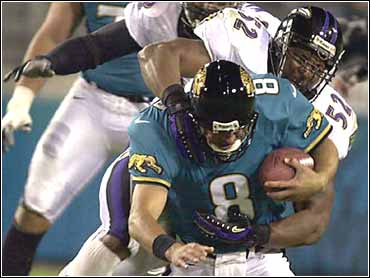 Ray Lewis fought for his life against murder charges in Atlanta, then became the most dynamic defender in the NFL as he led the Baltimore Ravens to the playoffs.

After the most trying year of his life, and perhaps his most productive on the field, Lewis easily won The Associated Press Defensive Player of the Year award announced Tuesday.

The centerpiece of the Ravens' record-setting defense feared he never would be selected by the nationwide panel of 50 sports writers and broadcasters who cover pro football because of what happened away from his job.

"It's like a fairy tale, or a movie, where there's a bad start and a beautiful ending," Lewis said. "But it's real life."

Lewis was accused of a double murder in Atlanta following a post-Super Bowl party last January and spent 15 days in jail. He was cleared of the murder charges in exchange for a guilty plea to obstructing a police investigation, and was fined $250,000 by NFL commissioner Paul Tagliabue, the largest player fine ever.

The case sullied the images of both Lewis and the league, and placed tremendous pressure on the middle linebacker to produce an even-better season than the three previous Pro Bowl years.

The results: a team-high 184 tackles, three sacks and two interceptions on a defense that set an NFL record for fewest points allowed (165) during a 16-game season.

"After I fought for my life in Atlanta, everyone said, `He might not be the same again. He might not get 100 tackles. Ray Lewis will never be the player he was.' Well, they were absolutely correct," Lewis said. "I'm not the same player. I'm better."

So good, in fact, that teammates and opponents readily acknowledged his pre-eminence at his position.

"He's not only the best linebacker in football," Ravens defensive tackle Tony Siragusa said, "he's the best in the history of football."

That might be a bit much, but Broncos coach Mike Shanahan, whose team was eliminated from the playoffs by Baltimore last Sunday, had similar praise.

"He's the best player on one of the strongest defenses the NFL has seen," Shanahan said. "Lewis is one of the best to ever play the game. He has great speed and is very physical, and has an uncanny ability to get off blocks and stay on his feet and make tackles."

Lewis, 25 and in his fifth NFL season, fretted that his involvement in the Atlanta case would eliminate any chance for winning the award. Instead, he took it in a landslide.

"I never thought it would happen," said Lewis, the first Raven to win the honor. "If someone said to you last January, `You know what? Ray is going to go through pure hell and by the end of the year he's going to be Defensive Player of the Year,' you would go, `How?' If you read it in a book you wouldn't believe it."