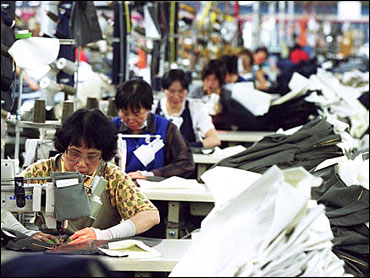 The company will close two sewing and finishing plants in San Antonio by year's end and lay off 800 workers. It will also shutter its three remaining plants north of the border that employ 1,180 people. The company will contract with foreign plants to make up for the closings.

The move will allow the company to focus more on product design, marketing and sales of its jeans, said Julie Klee, general manager of Levi Strauss & Co. in Canada.

"The closures are an absolutely necessary part of ensuring the long-term competitiveness of our business," Klee said.

San Francisco-based Levi Strauss, which just turned 150 years old, became one of America's iconic brands in the 1950s and '60s as Levis became a wardrobe staple of baby boomers.

But the company has struggled in recent years to connect with younger consumers. Sales peaked at $7.1 billion in 1996 but have fallen for six straight years to $4.1 billion. In 2002, Levi's U.S.-based parent company closed six U.S. manufacturing plants, eliminating 3,600 jobs.

In an effort to bounce back, the company has designed more clothes to appeal to teenagers and young adults, and cut costs to lower the prices of its jeans. The company also entered the discount jeans market earlier this summer with a new brand called Signature that is sold in Wal-Mart stores.

Levi Strauss is one of several clothing companies nationwide that has been shutting down U.S. plants and moving production to other countries with cheaper labor in recent years.