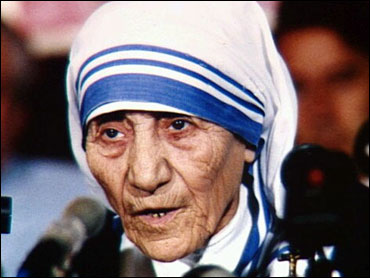 In life, Mother Teresa was an icon — for believers — of God's work on Earth. Her ministry to the poor of Calcutta was a world-renowned symbol of religious compassion. She was awarded the Nobel Peace Prize.

In a rare interview in 1986, Mother Teresa told CBS News she had a calling, based on unquestioned faith.

"They are all children of God, loved and created by the same heart of God," she said.

But now, it has emerged that Mother Teresa was so doubtful of her own faith that she feared being a hypocrite, reports CBS News correspondent Mark Phillips.

In a new book that compiles letters she wrote to friends, superiors and confessors, her doubts are obvious.

"Where is my faith?" she wrote. "Even deep down… there is nothing but emptiness and darkness... If there be God — please forgive me."

Eight years later, she was still looking to reclaim her lost faith.

"Such deep longing for God… Repulsed, empty, no faith, no love, no zeal," she said.

As her fame increased, her faith refused to return. Her smile, she said, was a mask.

"These are letters that were kept in the archbishop's house," the Rev. Brian Kolodiejchuk told Phillips.

The letters were gathered by Rev. Kolodiejchuk, the priest who's making the case to the Vatican for Mother Teresa's proposed sainthood. He said her obvious spiritual torment actually helps her case.

"Now we have this new understanding, this new window into her interior life, and for me this seems to be the most heroic," said Rev. Kolodiejchuk.

According to her letters, Mother Teresa died with her doubts. She had even stopped praying, she once said.

The church decided to keep her letters, even though one of her dying wishes was that they be destroyed. Perhaps now we know why.