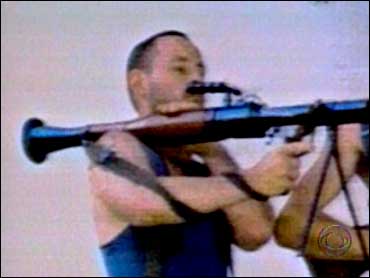 When young Australian David Hicks got an offer from a Saudi friend to go to Osama bin Laden's camps in Afghanistan in December 2000, he did not think twice.

"So many of today's Muslims want to meet bin Laden but cannot, and after only being Muslim for 16 months Allah has given me the chance to," he gushed in a letter to his mother. "Please don't worry."

Within six months, Hicks - who took the name Mohammad Dawood - had met bin Laden at least 20 times and was full of praise for the al Qaeda leader.

"Lovely brother, everything only for the sake of Islam," Hicks wrote to his mother in May 2001. "Only reason non-Muslims call him the most wanted terrorist is because he has the money to take action, which was given to him by Allah."

The meetings with bin Laden are mentioned in Hicks' account of his journey from a working-class background in the central Australian city of Adelaide to Islamic jihad, made public for the first time last week.

Hicks was the first person convicted before a U.S. military tribunal at Guantanamo, and is now free in Australia after serving a seven-year sentence for supporting terrorism.

Hicks, who is said to no longer be a practicing Muslim, is barred under a plea deal from speaking publicly. But Federal Magistrate Warren Donald released his letters and a diary in court to back his ruling that Hicks is still a terror threat.

The ruling puts Hicks under restrictions until the end of the year, requiring him to report to police twice a week and live at an approved address.

While the documents are at least seven years old, they offer firsthand, detailed descriptions of the intensive training undergone by would-be terrorists, as well as insight into the mind of a convert to extremist Islam.

(AP Photo/HO)
In the papers, the Australian comes across as both an eager foot soldier and a wide-eyed, naive adventurer, whose notes on his military training are as detailed and casual as if he were studying high school physics.

Hicks, now 32, converted to Islam in 1999 after watching television reports of the conflict in Albania. He went to Albania to join the Kosovo Liberation Army, a Muslim group fighting against Serbian forces, but when he got there the conflict was over.

He then trained in Pakistan with Lashkar-e-Tayyaba, an al Qaeda-affiliated group that is fighting for the independence of Muslim-dominated Kashmir from India.

He sent home a notebook filled with details and diagrams on how to use numerous weapons, including mortars, ballistic missiles, rocket-propelled grenades and machine guns. He also learned how to carry out attacks against heavily guarded targets and blow up a tank.

"The training was very intense," he wrote to his family in August 2000. "Extreme fitness, which I gave up smoking, military tactics and technics (sic), religious knowledge and weapons training."

But as time went on, Hicks became disillusioned with Pakistan as not Islamic enough, and impatient that he was not being included in big military operations.

So in 2000, Hicks traveled to Afghanistan, which he revered as a model Islamic country. He returned to Pakistan four days later after he criticized the actions of some Taliban members and they held a knife to his throat. He later described the leaders as "war-hungry, blood-hungry idiots."

Back in Islamic school in Pakistan, some Arab friends offered to help him get into bin Laden's camps. He immediately agreed.

"Not for fighting. For training, plus I will continue my Quran under their teaching and improve upon my Arabic," he wrote to his mother at the end of 2000.

Hicks' letters from Afghanistan are short on details about the camps. But in brief sentences here and there, he defended bin Laden. One letter said the al Qaeda leader could not have been behind a plot to blow up a nuclear reactor in Sydney during the September 2000 Olympics.

"If anyone it was the Taliban. An act like that is extremely far from an Islamic act," he wrote.

Another letter questioned the United States for blaming bin Laden for the October 2000 suicide bombing of the USS Cole in Yemen, which killed 17 American soldiers. Al Qaeda later claimed responsibility for the attack.

By May 2001, Hicks appeared entranced by his time at the camps, and even came to respect the Taliban again as "the only true strong Islamic group in the world succeeding." He gave his mother - who also converted to Islam - a phone number to reach him. But he warned her to use his pseudonym, Abu Hakeem, to protect his identity.

"Non-Muslims send a lot of spies here, especially to Osama bin Laden's Arab organization, which is where I am. They gather information on people and if you leave the country you get arrested by America or others," he wrote.

But things were improving, he said.

"Today it's not so much problem," he wrote. "The Arabs have established security."

That was his last letter home.

In December 2001, Hicks was captured among the Taliban by the U.S.-backed Northern Alliance in Afghanistan and handed to the U.S. He was imprisoned and then sent to Guantanamo.

Hicks pleaded guilty in February 2007 to providing material support for terrorism. After dropping allegations of abuse by U.S. soldiers, Hicks was given to Australian authorities, and finished his sentence in his home country last December. He turned away from Islam while in military prison, his lawyer David McLeod says.