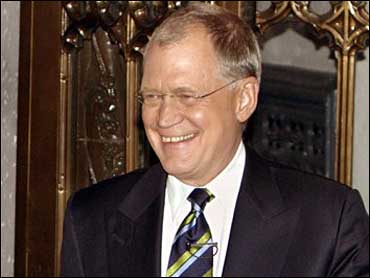 A state judge has lifted a restraining order granted to a Santa Fe woman who accused talk-show host David Letterman of using coded words to show that he wanted to marry her and train her as his co-host.

Judge Daniel Sanchez on Tuesday granted a request by lawyers for Letterman, host of CBS' "Late Show," to quash the temporary restraining order that he earlier granted to Colleen Nestler.

She alleged in a request filed Dec. 15 that Letterman has forced her to go bankrupt and caused her "mental cruelty" and "sleep deprivation" since May 1994.

Nestler requested that Letterman, who tapes his show in New York, stay at least 3 yards away and not "think of me, and release me from his mental harassment and hammering."

Lawyers for Letterman contended the order was without merit.

The New Mexico court doesn't have jurisdiction over Letterman, who is a resident of Connecticut, Rogers said.

Nestler appeared in court without a lawyer and represented herself.

Responding to a question from the judge, Nestler said she had no proof of the allegations she had made against Letterman.

She also said that if Letterman or any of his representatives came near her, "I will break their legs" and establish proof of her allegations.

Nestler said after the court hearing that "I have achieved my purpose. The public knows that this man cannot come near me."

She also said that her comment about breaking legs "is not a threat."

"I appealed to the court for a restraining order to keep this man away from me, but now that's been denied me," she said. "He has access to me. He can actually come for me or send people. He has many accomplices. I know this sounds crazy. I was crazy to have listened to him in the beginning."

Nestler's application for a restraining order was accompanied by a six-page typed letter in which she said Letterman used code words, gestures and "eye expressions" to convey his desires for her.

She wrote that she began sending Letterman "thoughts of love" after his show began in 1993, and that he responded in code words and gestures, asking her to come East.

Nestler said Letterman asked her to be his wife during a televised "teaser" for his show by saying, "Marry me, Oprah." Her letter said Oprah was the first of many code names for her and that the coded vocabulary increased and changed with time.

John Stamos: "This is a great moment"
Thanks for reading CBS NEWS.
Create your free account or log in
for more features.
View CBS News In
CBS News App Open
Chrome Safari Continue
Be the first to know
Get browser notifications for breaking news, live events, and exclusive reporting.