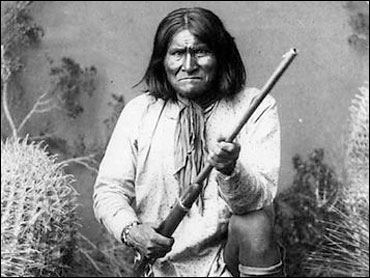 A Yale University historian has uncovered a 1918 letter that seems to lend validity to the lore that Yale's ultra-secret Skull and Bones society swiped the skull of American Indian leader Geronimo.

The letter, written by one member of Skull and Bones to another, purports that the skull and some of the Indian leader's remains were spirited from his burial plot in Fort Sill, Okla., to a stone tomb in New Haven, Conn., that serves as the club's headquarters.

According to Skull and Bones legend, members — including President George W. Bush's grandfather, Prescott Bush — dug up Geronimo's grave when a group of Army volunteers from Yale were stationed at the fort during World War I. Geronimo died in 1909.

"The skull of the worthy Geronimo the Terrible, exhumed from its tomb at Fort Sill by your club ... is now safe inside the (Tomb) together with his well worn femurs, bit & saddle horn," according to the letter, written by Winter Mead.

But Mead was not at Fort Sill and researcher Marc Wortman, who found the letter last fall, said Monday he is skeptical the bones are actually those of the famed Indian leader.

"What I think we could probably say is they removed some skull and bones and other materials from a grave at Fort Sill," he said. "Historically, it may be impossible to prove it's Geronimo's. They believe it's from Geronimo."

Harlyn Geronimo, the great grandson of Geronimo, said he has been looking for a lawyer to sue the U.S. Army, which runs Fort Sill. Discovery of the letter could help, he said.

"It's keeping it alive and now it makes me really want to confront the issue with my attorneys," said Geronimo, of Mescalero, N.M. "If we get the remains back ... and find that, for instance, that bones are missing, you know who to blame."

A portion of the letter and an accompanying story were posted Monday on the Yale Alumni Magazine's Web site.

Only 15 Yale seniors are asked to join Skull and Bones each year. Alumni include Sen. John Kerry, President William Howard Taft, numerous members of Congress, media leaders, Wall Street financiers, the scions of wealthy families and agents in the CIA.

Members swear an oath of secrecy about the group and its strange rituals, which are said to include an initiation rite in which would-be members kiss a skull.

Geronimo was a leader of the Chiricahua group of Apaches in the southwestern states of Arizona and New Mexico. He waged a guerrilla war in the 1870s and 1880s against the U.S. Army, which was trying to remove them from ancestral tribal lands and force them onto reservations.

After surrendering for the final time in 1886, Geronimo and his followers were deported as prisoners of war to Florida, spent time in prison in Alabama, and finally ended up under military confinement at Fort Sill. There, Geronimo adopted Christianity, became a successful farmer and ended up a national celebrity with the publication of his autobiography in 1906.