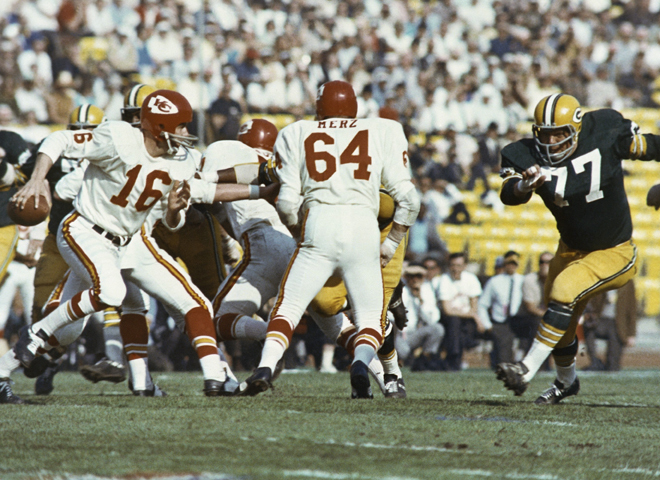 It was one of the Holy Grails of broadcasting - a copy of the telecast of the very first Super Bowl matchup in 1967, which was thought not to survive.

Vintage television broadcasts have not fared well - either due to poor archiving or the fragility of early videotape recordings. And then there was the expense: When videotape was first developed it was expensive, and broadcasters and TV stations often wiped it and reused it rather than pay for costly storage.

It seems odd today that a world championship NFL game - especially a Super Bowl - would have disappeared, especially as it was broadcast by TWO networks, CBS and NBC. As it turns out, copies of the January 15, 1967 broadcast of Super Bowl I between the Green Bay Packers and the Kansas City Chiefs were not kept by either network, and home video recording was virtually unknown then.

NFL Films does have game footage shot by its crew, but hardly anything else has survived of an historic broadcast.

Now the Paley Center for Media in New York has what it says is a copy of the CBS broadcast that was stored in an attic in Pennsylvania for 38 years. The Wall Street Journal reports that the archive, which has publicized its search for missing broadcasts, received a donation of the two-inch videotape recording in return for having it restored.

Curator Ron Simon told the Journal that the sequence of plays, announcers and graphics convince him it is the genuine article. "I've seen faked games before, and this is not one," Simon said.

"This is one of the great finds," he told the Journal.

According to the Journal, the tape owner's father recorded the broadcast by WDAU-TV in Scranton/Wilkes-Barre, Pa., on a videotape machine at his workplace.

After learning in 2005 that the missing broadcast was valued at more than $1 million, the tape's owner contacted the Paley Center, and brought two reels (warped and slightly beat up) of two-inch quadruplex tape. The 94-minute tape is in color but incomplete - it is missing part of the third quarter and the half time show, and does suffer from occasional static. The recording was stopped and started in-between plays, probably to conserve tape. But it does boast some period commercials, and instant replay.

The broadcast archive now possesses a copy of the game, but cannot show it - at least until the matter of possession is resolved. An attorney for the tape's owner told the Journal that the NFL claims it is exclusive owner of the copyright of the broadcast of Super Bowl I (which incidentally wasn't called the Super Bowl - it was the AFL-NFL World Championship Game), and so legal matters are pending.

Click on the player below to view a video from wsj.com.