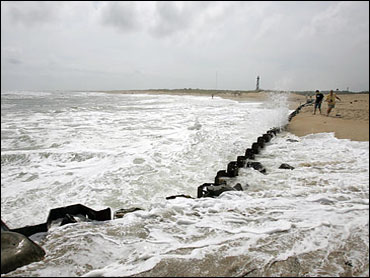 The locals are likening Ophelia to a true nor'easter, reports CBS News Correspondent Cynthia Bowers. Even if the winds do reintensify to hurricane strength, it's the slow-moving nature of this storm that led North Carolina's governor to declare a state of emergency and preposition 300 national guardsmen along the coast in the event they are needed for rescue in low-lying areas.

Wind gusts are expected to intensify to 60 mph by Tuesday afternoon and continue for 24 hours or more, Bowers reports. No one knows what kind of infrastructure damage or flooding will be the result.

The storm's outer bands of rain were expected to begin drenching the coast by early Wednesday as Ophelia bobs slowly to the northwest and gets better organized.

Nonresidents were ordered to leave one of North Carolina's Outer Banks islands and school systems in five counties were closed.

"I don't think I would be human if I said Katrina had no impact on me," Wilmington Mayor Spence Broadhurst said after deciding to call for a voluntary evacuation.

With its unpredictable path, South Carolina Gov. Mark Sanford also called for a voluntary evacuation Monday of oceanfront and riverside areas in the northeastern part of his state.

"The potential for severe weather is not limited to the coast. This is a serious storm that's got the potential to do a lot of damage and put lives in jeopardy if we don't take it seriously," Sanford said.

Ophelia dropped slightly in strength Monday from a hurricane to a tropical storm as it drifted offshore. The system could regain hurricane strength over the next day or so, forecasters said, prompting them to issue a hurricane warning from the South Santee River, S.C., to Cape Lookout, N.C.

At 5 a.m. EDT, Ophelia was centered about 130 miles east-southeast of Charleston, S.C., and about 150 miles south of Wilmington, N.C. It was stationary, with maximum sustained winds near 70 mph.

Forecasters feared the slow-moving storm could take its toll by battering coastal communities with hours of wind and rain. Up to 10 inches were possible.

"We're not talking about something that will be in and out of here in six hours," said Allen Smith, Carteret County's emergency services director.

While many residents and visitors were keeping tabs on Ophelia because of the vast destruction caused by Katrina along the Gulf Coast, others insisted they wouldn't let the storm disrupt their life.

"My family is all coming in for a family reunion, including my 84-year-old mother," said Dodie Curtis, 62, of Gilford, Maine, who was getting ready to take a stroll on Wrightsville Beach. "This is our family thing and we don't plan to go anywhere unless it gets a lot worse."

Ophelia became a tropical storm Wednesday off the Florida coast and later strengthened to a hurricane. It is the 15th named storm and seventh hurricane in this year's busy Atlantic hurricane season, which began June 1 and ends Nov. 30.