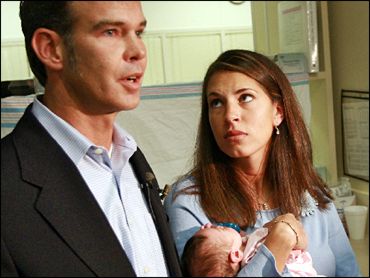 A third premature infant has died after being accidentally given an adult-sized dose of a blood thinner medication at a hospital last week.

"We are all saddened by this news, and our hearts are with this family and all the families who have been affected," Methodist Hospital spokesman Jon Mills said in a news release Wednesday.

The baby girl, named Thursday Dawn Jeffers, died late Tuesday at Riley Hospital for Children, where she was transferred after being born at Methodist.

They and three other babies were given too-strong doses of heparin, which is often used to prevent blood clots that could clog intravenous tubes, after a pharmacy technician accidentally stored adult doses in the neonatal unit's drug cabinet. The other three babies were still in critical condition because they are premature but were not considered in danger from the overdoses, Mills said.

The hospital will offer to pay for family counseling and provide restitution to all six families affected, said Sam Odle, president and CEO of Methodist Hospital, which is part of Clarian Health Partners.

"We are acutely aware that nothing can adequately compensate these families for their loss," Odle said.

Since the overdoses, the hospital has taken steps to ensure the mistake does not happen again. It will no longer keep certain doses of heparin in inventory, and all newborn and pediatric critical care units will require a minimum of two nurses to validate any dose of heparin, Odle said.

It is not the first time the hospital has administered an overdose of the drug, Odle said. A similar overdose of heparin was given to two patients in the hospital's Pediatric Intensive Care Unit in 2001. Both recovered, he said.

Staff members involved with Saturday's mistake were receiving counseling and taking time off until they felt comfortable returning to work, hospital officials said.

Deb Hutchens, a neonatal nurse practitioner, said nurses were devastated. "We all feel very deep sorrow. It's just going to be a very long healing process for all of us," she said.