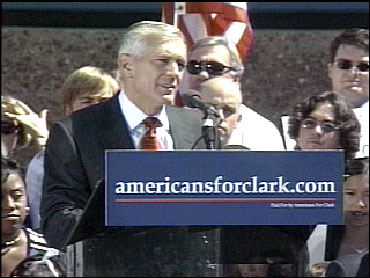 Dotty Lynch is the Senior Political Editor for CBS News.

To: General Clark
From: Lee Atwater
Re: You Need Help Fast

You might not have heard since you've been playing TV General for the past few months, but now that I've passed to the other side I've been assigned to help the Democratic candidates in 2004 as a penance for all those Willie Horton ads and smart-aleck comments about folks using jumper cables to cure depression.

And judging from some of the reports of the first few days of your campaign, you need Bad Boy Lee's crash course in Presidential Politicking 101.

Someone just handed me a few of the "Clarkisms" which were reported by the Political Hotline, which might not be Stars and Stripes but it's something everyone in politics reads every day.