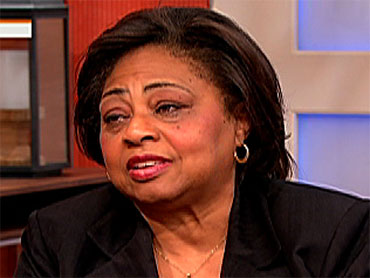 It goes without saying that Andrew Breitbart did not viciously smear Shirley Sherrod because of her all-powerful role as a mid-level appointee in the US Department of Agriculture. This invented controversy isn't about farming, and it's not even about taking shots at the NAACP, which recently called out the Tea Party's racism before rushing to repudiate Sherrod-only to later admit that they'd been "snookered." At the end of the day, the fiasco is not even really about Obama.

Sure, in the Tea Party universe the caricature of "Shirley Sherrod, Racist" stands in for the quasi-Black Panther, secretly-communist president. She's Obama's willing bureaucrat, an ordinary black civil servant who uses an arm of the mighty federal leviathan to discriminate against white farmers and to redistribute taxpayer wealth to fellow blacks. She then has the gall to brag about it in front of a black audience, who hoot in approval, on camera. Like the mythical recording of Michelle Obama railing against "whitey," the Sherrod video is a hoax, two minutes and thirty-six seconds of sliced and diced footage that should be totally implausible to anyone who thought about it for a cool moment. But for the Tea Party crowd, it proved irresistible. "She too perfectly personifies the bureaucracy staffing the federal behemoth not to have a brilliant future in 'government service' ahead of her," wrote one Tea Party blogger. "Next stop, Zimbabwe," concluded another.

In a way, we should be grateful to Breitbart. His hack job provided us with a perfect visual condensation of the racial paranoia that has animated the Tea Party since its inception. It's the logic behind the equally fabricated Breitbart smear against ACORN; it's what drives Glenn Beck to say that healthcare reform amounts to the "beginning of reparations" and what Rush Limbaugh signals when he accuses Obama of inflicting economic pain as a form of "payback." And it's the sentiment found in polls of Tea Party activists, 52 percent of whom say that "too much has been made of the problems facing black people."

But this story is older than the Tea Party, older than the current drove of right-wing demagogues. It's the story that has been told to white middle- and working-class voters by the right since the Reagan administration in order to explain their dwindling paychecks and prospects: racism is over; it is minorities who now have too much power; they are stealing your jobs, your future. And with that insidious whisper (now a shout), the specter of reverse racism chases away the all-too-real and yet all-too-abstract forces of neoliberal economic policy. Who can focus on the workings of contemporary global capitalism when the Zimbabwe-fication of America is nigh! Obama, of course, crystalizes this narrative, giving it agency, power, motive, a face to deface. But it existed before him too; it litters, for example, civil rights case law since the '70s, in Bakke v. Regents, in Gratz v. Bollinger and in Ricci v. DeStefano, the New Haven affirmative action case that got Sonia Sotomayor into so much hot water with the right.

That the base of Tea Party activists eagerly believed the Sherrod hoax is not surprising. What is upsetting is that Agriculture Secretary Tom Vilsack fell for it too, so much so that he was willing to trust Andrew Breitbart's account (!) even before he heard Shirley Sherrod's side of the story or initiated even the most cursory of reviews. Perhaps more disturbing still is that the NAACP itself readily accepted that a lifelong civil rights activist had confessed to racial discrimination in a public speech in front of an approving audience of its own members, an incident that went entirely unreported until Breitbart exposed it.

These are worrying signs-not just of the reflexive credibility given to video (does nobody understand that practice of editing?) and of the power of right-wing media-but also of just how entrenched the myth of pervasive reverse racism is. We live in an era where the dominant paradigm for understanding race is colorblind racism, the ideology that racism is evidenced only by individual acts of speech and prejudice, which anyone of any color is equally likely to commit.

It's this logic that the NAACP conceded to when it phrased its rebuke of the Tea Party's racism as a function of "bigoted elements" and "signs and speeches" instead of as part of a larger strategy that extends far beyond the Tea Party's colorful slogans. It is also what Peter Beinart affirmed in his post-mortem on the Sherrod saga in which he suggests that Obama, the NAACP and other liberal groups should abandon race-based affirmative action in favor of class-based affirmative action because "race isn't as central to American inequality as it once was." Ditto for Democratic Senator Jim Webb, who took the occasion of Sherrod's vilification (without actually mentioning her name) to throw up the white flag of surrender to the right's politics of resentment. Lamenting the fact that "WASP elites have fallen by the wayside," Webb calls for an end to government affirmative action programs because once "Procrustean policies" are abandoned, "fairness will happen, and bitterness will fade away."

Notice here-in kinder, gentler form-the same zero-sum politics that governs the backlash to the civil rights movement: minorities' gains come at the expense of working-class whites, both of whom will have to battle it out for their share of an ever-shrinking slice of the pie. It's class or race, but never both.

Had anyone bothered to listen to Shirley Sherrod's whole speech before they smeared and canned her, they would have come away with quite a different lesson. Yes, Sherrod talks about how she learned to overcome her wariness about helping a white farmer and her realization that "the struggle is really about poor people"-but there is never any suggestion in her address that she views racial and economic justice as mutually exclusive goals. In fact, she points out that of the 129 employees in her division of Rural Development at the USDA, fewer than twenty are people of color. Had anyone in the press bothered to look at EEOC data, they would have reached a similar conclusion. Although minorities make up only a third of federal employees, they file 77 percent of complaints of racial discrimination; in other words, a minority is almost seven times more likely to report an incident of racial discrimination than a white federal government employee.

Or just take a look at the impact of rampant deregulation: as a recent study by Institute on Assets and Social Policy points out, poor whites have experienced economic stagnation in the past quarter century; their net went from zero to $100. But in the same period, the poorest blacks experienced not just stagnation but decline, going from -$2,000 in wealth to -$3,600.

Virtually nobody on the left-not the Obama administration, not the NAACP, not the liberal blogosphere-noted these and similar statistics in response to the Sherrod saga, although there were plenty of recriminations levied at the ugly, Breitbart- and Beck-fueled right-wing media. It's as if we want to put this whole "thing" behind us, to blame it all on the conservative boogeymen, to focus on class-based remedies, or to simply transcend race altogether-remember Andrew Sullivan's hope that Obama's election would say "Goodbye to All That?" But black man in White House aside, what we still don't want to have is an honest discussion about race, race and class together. In doing so, we only give oxygen to the Breitbarts of the world-those who would use race as a wedge issue to split white working-class and minority voters. And perhaps that's the ultimate takeaway of the Sherrod story: our silence will not protect us.

By Richard Kim:
Reprinted with permission from The Nation