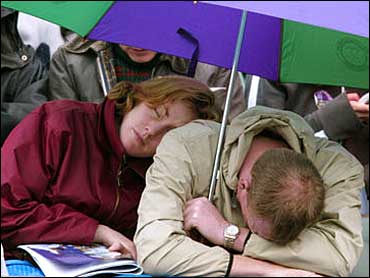 Getting a good night's sleep is hard for many adults and that often means poorer health, lower productivity on the job, more danger on the roads and -- a less vibrant sex life, an eye-opening new survey shows.

A whopping 75 percent of the respondents to the National Sleep Foundation poll report symptoms of sleep problems, such as difficulty falling asleep, waking during the night, experiencing fatigue during waking hours, or snoring.

The results were released Tuesday.

Roughly one-fourth of respondents who have partners report that their sexual relationship has been hurt because they have been too sleepy. They had sex less often or lost interest in having sex because they were too tired.

Dr. Neil B. Kavey, director of the Sleep Disorders Center at Columbia-Presbyterian Medical Center in New York and a spokesperson for the sleep foundation, tells The Early Show co-anchor Rene Syler, "We're talking about people not paying enough attention to the importance of sleep, and so living on a daily basis in a terribly sleep-deprived state. And that sleep deprivation affects every aspect of the way we feel and the way we function."

The poll shows respondents getting an average of 6.9 hours of sleep per night. Many experts say adults need a minimum of seven to nine hours of sleep a night.

Most people ignore such problems, and few think they actually have one, the survey shows.

Kavey says people who are sleep deprived don't recognize how much they need sleep and how poorly they're performing: "When we don't sleep, we think we get away with it -- we're very poor self-observers. When we run sleep deprived, we are not the same people. We'd be much better off if we had a full night's sleep.

"We have the capacity to function each though we're sleep deprived. …But it's like carrying an extra 50 pounds. You can still run the 100-yard dash, but you don't do it as well."

Only half of those polled were able to say they slept well on most nights. One-fourth of adults say sleep problems have some impact on their daily lives.

Richard Gelula, the sleep foundation's CEO, says there's a link between sleep and quality of life.

"People who sleep well, in general, are happier and healthier," he says. "But when sleep is poor or inadequate, people feel tired or fatigued, their social and intimate relationships suffer, work productivity is negatively affected, and they make our roads more dangerous by driving while sleepy and less alert."

Symptoms of a sleep problem include difficulty falling asleep, waking a lot during the night, waking up too early and not being able to get back to sleep, waking up feeling unrefreshed, snoring, unpleasant feelings in the legs, or pauses in breathing.

It's not only how much sleep a person gets, but the quality of sleep that matters, the report says.

Some of the nation's sleep habits can be attributed to an always-on-the-go society, says Chris Drake, senior scientist at the Henry Ford Hospital Sleep Center in Detroit and co-chairman of the 2005 poll task force.

"In an increasing 24-hour society, people are staying up much later," he said. "They can go to a 24-hour pharmacy or supermarket. They can do anything at any time of the night and day. That can impact on people's decisions to stay up later watching TV, doing work, being on the Internet."

What can we do about it?

"Probably the most important," Kavey asserts, "is educating people about (the self-deception). And, emphasize getting enough sleep.

"Just as you shouldn't have that extra dessert, go to bed a half-an-hour early. Don't watch that extra TV show. If you get a chance to nap, nap. Get sleep. It takes a toll on you and everybody around you when you don't."

Among the study's findings: