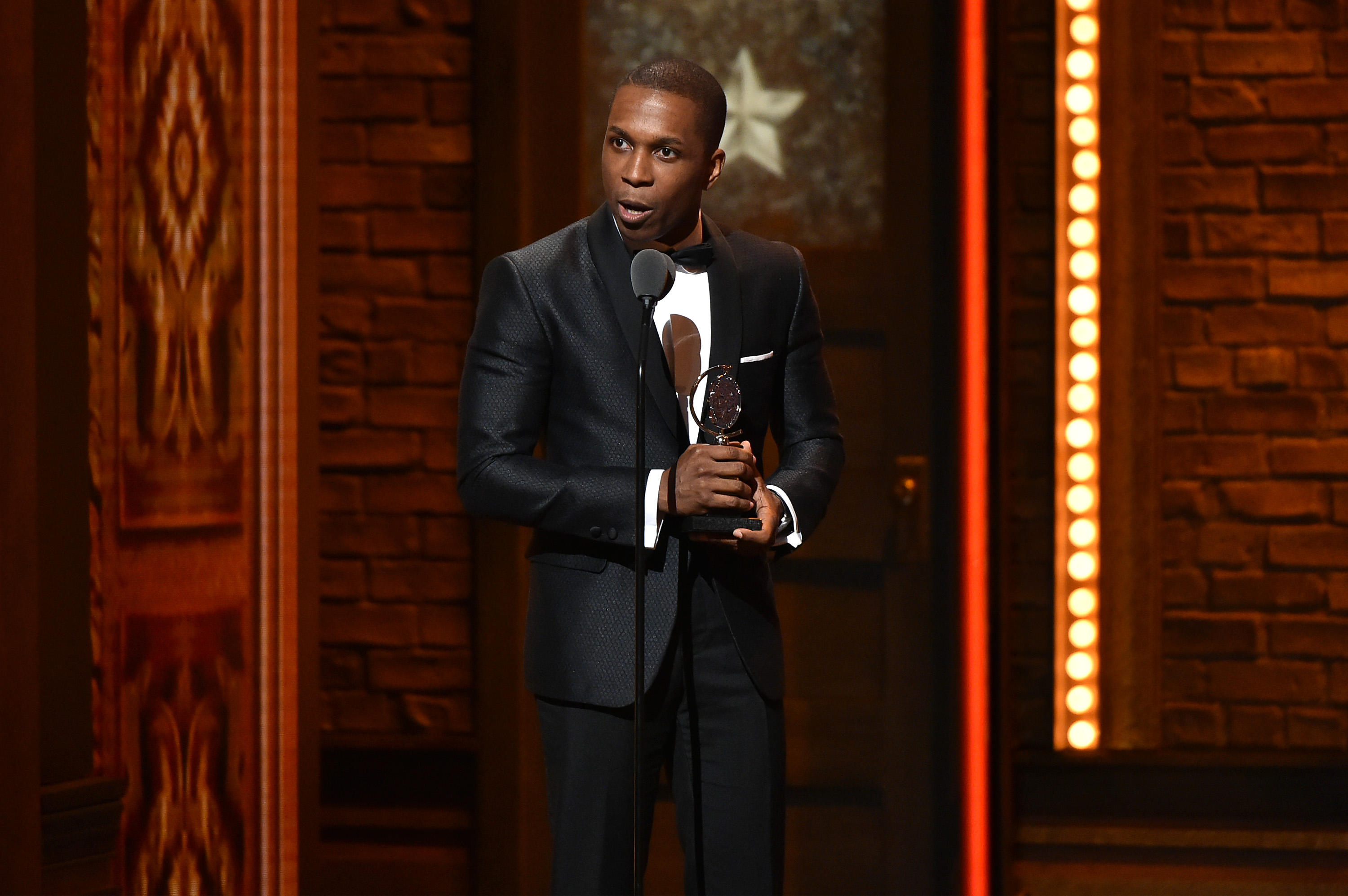 Former “Hamilton” star Leslie Odom Jr. has moved on from the hit Broadway show, and the actor and singer says he wants to give back after his successful year: Odom received a Tony Award for best actor in a musical and released a self-titled jazz album.

Tell us more about why you’re getting involved in World Humanitarian Day.

“Hamilton” has brought so many wonderful things into my life. It’s been a year of receiving and taking in all of the wonderful things that were around me so whenever I get a chance to give back, which World Humanitarian Day certainly was, I jump at it.

You just released a self-titled album of jazz classics that debuted on #1 on iTunes. What inspired you to take on that project?

Well doing some sort of recorded product was a childhood dream of mine, but I could have lived if it didn’t happen. But “Hamilton” -- once again, the juggernaut success of that show made it so that doors were open that were never open before. I had the chance to sign with a label called S-Curve at BMG.

I’m so happy. I’ve been a singer for many, many years. To now have the support and expertise of a label behind me is giving me a chance to do things I’ve never done before. We recorded the album and I’m very proud of it. It’s a beautiful record, a personal record and to top it off, it’s doing well. The fact that people are buying it and enjoying it is a really nice surprise and a confidence booster for sure.

In what way is it a personal record?

It’s a self-titled debut, so there was something about when we started this project that said how do we get your heart and soul on your record. At the end of the day, I would have called it something else if it didn’t feel like a good representative of who I am and who I want to be as an artist. I would have called it something else, but after it was all said and done, it felt like it was my heart on vinyl, so to speak. So that’s why we kept the title.

Do you have any tracks you connect with the most?

I love “Autumn Leaves” because I loved that for a really long time. I heard many versions of that tune that I just revere, so I wasn’t sure if we’d be able to find an arrangement of it that felt like it would be honest or like we were saying something new, so when we did, when we found that arrangement that felt fresh and vital. I was very happy about that.

I also loved our version of “Nobody Knows When You’re Down and Out” because it’s certainly a high point in my career, but I remember so well a couple of years ago when the phone wasn’t ringing, when I wasn’t getting to talk to nice people like you about my art, so I keep those times close, even in a time like this. I remember the tough times so I enjoy singing that one as well.

How is life after “Hamilton”? Do you miss it?

I don’t have to miss it because it’s around every single day. I get stopped on the street a couple times a day. I still get to have conversations about it. I sing the songs in my concerts, so it’s still around, but I did that show about 400 times, so my body needed a break and creatively, I was ready to move onto the next challenge.

Life is great after “Hamilton.” The first couple days you’re trying to process, “Was it all a dream?” Everything was the same and nothing was the same. Everything in my life had just shifted slightly, so it’s taking some getting used to. It’s all good, nothing bad, but before “Hamilton,” nobody stopped me on the train or the street so it’s taking a little getting used to the new friends that I have because of this show.

I’ll go to introduce myself to a hero of mine, somebody I’ve looked up to and they’ll already know who I am. That is totally strange. They’re like, “Oh, I’ve seen you twice,” and I’m like, “What? You’ve seen me in what?”

How did it feel to be part of a momentous Tony Awards night when black actors took home all musical acting awards?

That night I didn’t notice it. I don’t know if I’ve ever had a longer night. By the end of that day I’d been up for something like 17 or 18 hours because I had to get up at 5:30 and then I had a matinee and then we had red carpet and during the Tonys we had several performances -- even after I won, I had a performance after that.

So that night I didn’t really notice much of anything, but afterward, I’ll say -- looking at that picture of me and Renee [Elise Goldsberry], Daveed [Diggs] and Cynthia [Erivo] -- I can imagine what it would have meant to me as a young teenager, when I first fell in love with the theater, what that picture would have meant to me at 14, 15 years old. I’m proud to be a part of that image. I’m proud to be part of that moment in time.

Did you know “Hamilton” was going to be special when you auditioned?

I knew that it was special. I didn’t know it was going to be successful. I never knew people would connect to it the way they have. I had no crystal ball so I couldn’t see Grammy and Tony Awards, but I knew the piece of writing was rare and incredibly special. I knew what Lin [Manuel Miranda] had put down on paper, the road map he’d given people.

If we did our jobs right, I knew we could show the world something they’d never seen before, but at every turn there’s a chance to get things wrong so you don’t know if you’re going to take the right steps. From the start it was such an unlikely success. It was such a far-fetched idea and when I was trying to describe it, no one understood what I was talking about -- lots of question marks.

Do you catch yourself singing “Hamilton” songs at home?

I really don’t and I think that’s a good thing. I was obsessed with the show before anybody heard the show. We all were. I was filled with inspiration and passion for that show for years before the world knew about it, when I heard early demos and we were part of the development. There was a fire, a desire to say something on that stage and you know, I think I really said it 400 times. I would think if there were still some part of me, that I needed to be there, that felt like I still had more to say, then I would still be there, but I think I said it,  so I left that show for the next generation of performers to pick it up and carry it forward.