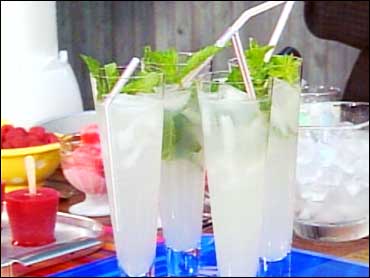 New research shows that lemonade is an effective — and delicious — way for kidney-stone-prone people to slow the development of new stones.

"When treating patients in our kidney stone center, we put everyone on lemonade therapy," says Steven Y. Nakada, chair and professor of urology at the University of Wisconsin, Madison.

Nakada spoke during a news conference on kidney stone research at this week's annual meeting of the American Urological Association in Atlanta.

Stones As Painful As Childbirth

If you've ever passed a kidney stone, you won't forget the sudden, intense pain in your flank. Some patients compare the pain with that of childbirth.
Kidney stones form when urine in the kidney becomes supersaturated with stone-forming salts — and when the urine doesn't contain enough stone-preventing substances. One of these substances is citrate.

For people prone to stones, doctors usually prescribe potassium citrate. It can be taken as a pill or in liquid form. But lemon juice is full of natural citrate.

When made into low-sugar or sugar-free lemonade, Nakada and colleagues found, lemon juice increases the amount of citrate in the urine to levels known to inhibit kidney stones. It doesn't work quite as well as potassium citrate. But for patients who'd rather avoid yet another medication, lemonade is an attractive alternative.

"The trend is going to be, if you can make a change in your diet and avoid medications, you are going to try to do that," Nakada said. "We see lemonade therapy as playing a role."

David Kang, a medical student and researcher at the Duke University Comprehensive Kidney Stone Center, found that this role can play for a long time. Kang and colleagues followed 12 kidney-stone patients who had been on lemonade therapy for up to four years.

Over the time they drank lemonade they had a lower burden of kidney stones and appeared to form kidney stones at a slower rate than they did before starting lemonade therapy. Kang says a large-scale clinical trial will be needed to confirm these findings.

"None of the patients needed medical intervention over a mean treatment period of four years," Kang said.

Lemonade also does something else needed by people prone to kidney stones. It helps them pass a lot of urine, said conference moderator Marshall Stoller, MD, vice chairman of urology and medical director of the urinary stone center at the University of California, San Francisco.

"To reduce kidney stones, you have to increase your fluid intake so that you pass 1.5 to 2 liters of urine a day," Stoller said. "If you live in sunny Atlanta, you may need to drink more than if you live in foggy San Francisco."

To make lemonade, Stoller, Nakada, and Kang recommend mixing 1 cup of concentrated lemon juice with 7 cups of water. A sugar substitute may be added to taste. Sugar should be avoided, as the extra calories in sugared lemonade are too much for most people's health.

But lemonade alone isn't the answer to kidney stones. It's only part of a stone-preventing diet.

"First, you should reduce the amount of salt in the diet," Stoller says. "Get rid of the salt shaker at the table. Use a potassium-based salt substitute. If you have a choice of two products, go to the one with less salt. Eat out less — restaurant food is salty — and never salt your food before tasting it."

Second on Stoller's stone-prevention diet is eating smaller portions of meat and fish at each meal.

"We are not saying to eat less meat, just eat less at individual meals," he says.

"Where does lemonade fit in? If you drink and enjoy lemonade, it gives you an additional benefit," Stoller says.