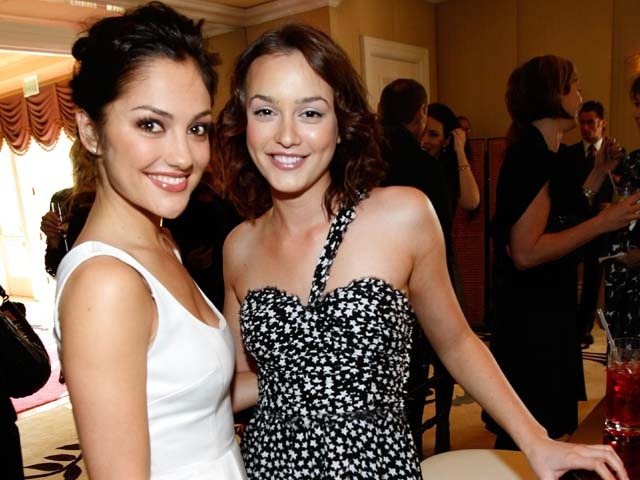 Besides being hot topics for teen girls, it has to do with the first time real-life best friends, Leighton Meester and Minka Kelly met - back in 2003 while filming separate commercials for the zip zapping skincare line, Clearasil.

After fending off zits during puberty, the two went on to become friends and famous TV stars.

Now, their personal and professional lives have merged on the set of their new movie, the psychological thriller "The Roommate.l" .

When asked to collaborate on a movie together, Kelly said, it was a "no brainer!"

When Meester hasn't been playing Blaire Waldorf, the semi-villainous heroine of the CW's "Gossip Girl," she is a also a singer and has released, "You Love Is A Drug." Last year, she signed with Universal Records and made her official debut several months later, contributing guest vocals to Cobra Starship's "Good Girls Go Bad." The song became Cobra Starship's biggest hit, cracking the Top Ten that summer. She continued working on her debut album throughout the latter half of 2009, according to her official bio.

Meester hasn't been a red carpet favorite; she's made several worst dressed lists, but that doesn't stop her from her bold choices.

Kelly who plays the spirited and conflicted cheerleader Lyla Garrity on NBC's "Friday Night Lights," has been keeping busy as well.

She was named the "Sexiest Woman Alive" by Esquire this year, where she admitted that her mom was a stripper - and she wasn't fazed by it at all.

"It was all about what we could do to have fun with nothing. She would come home at like three, four o'clock in the morning, and she would wake me up in the middle of the night and we'd go grocery shopping," Kelly told Esquire.