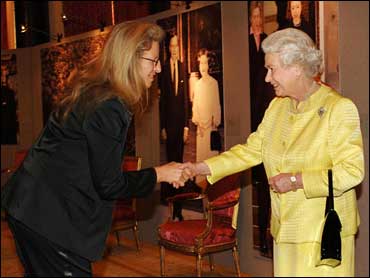 Leibovitz photographed the British monarch to commemorate her six-day visit to the United States. The queen's May 3-8 trip will be her fourth state visit to the U.S.. It comes 50 years after her first, when she was a guest of President Eisenhower.

Leibovitz, 57, is perhaps best known for her photograph of a naked John Lennon hugging a fully clothed Yoko Ono for Rolling Stone magazine.

She has also photographed Whoopi Goldberg in a bath of milk and a very-pregnant Demi Moore for the cover of Vanity Fair.

Her portrait of Queen Elizabeth II is considerably more formal. The photo, unveiled to the public Wednesday, shows the queen in the White Drawing Room at Buckingham Palace, gazing out toward the palace lawns and dressed in a white fur stole, gold-embroidered evening dress and diamond tiara.

Photos: Inside Charles & Camilla's Wedding
Photos: Royal Life, The Queen At 80
Photos: Elizabeth Through The Years

Leibovitz said before the photo sessions in March that she wanted to take "a very simple portrait."

The picture is reminiscent of the formal portraits of the monarch's mother, the Queen Mother Elizabeth, by British photographer Cecil Beaton.

"I like tradition," Leibovitz said. "Cecil Beaton's pictures — they're very important to me."

The queen will be in Virginia to commemorate the 400th anniversary of the Jamestown settlement, the first permanent English settlement in the New World.

She will attend the Kentucky Derby on Saturday and then to travel to Washington to meet President Bush and his wife, Laura.