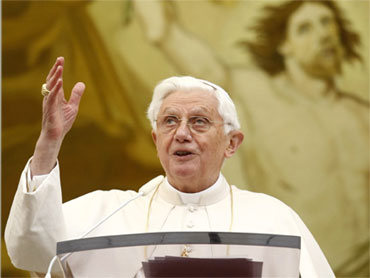 One of the next tests for Pope Benedict XVI in the burgeoning clergy abuse crisis is deciding the fate of a once-prominent, strict religious order that now admits its late founder, the Rev. Marcial Maciel, fathered at least one child and molested underage seminarians.

Results of a Vatican investigation that Benedict ordered last year into the Legion of Christ are expected to be released soon, at a time when the Roman Catholic Church is under intense pressure to aggressively confront abuse.

The case is far more complex for Benedict and his aides than uncovering what Maciel did. Although Legion officials insist they have only just learned of Maciel's misdeeds, many critics suspect the clergymen knew that the founder hurt children and led a double life, but did nothing about it. Maciel, who died in 2008 at age 87, had groomed many of the top leaders for their posts. The current general director, the Rev. Alvaro Corcuera, was at Maciel's deathbed.

"If the pope is genuinely intent on dealing with the crisis, at a minimum, he would have to remove that entire high command," said Jason Berry, co-author of the book and documentary "Vows of Silence," about victims' attempts to persuade the Vatican to discipline Maciel. "This is a salvage operation. It's mopping up a lot of muck. My question is whether the pope and the men around him truly understand what this organization is."

Denver Archbishop Charles Chaput, one of the investigators the Vatican appointed to evaluate the Legion, declined to comment. Germain Grisez, a prominent moral theologian at Mount St. Mary's University in Maryland, said the Legion must "identify those who knew about Maciel's wrongdoing, get rid of them, and begin afresh," with new leaders and a new constitution.

The Legion was founded in Mexico in 1941 and its culture was built around Maciel. His photo adorned every Legion building, his biography and writings were studied, and his birthday was celebrated as a feast day. Until recently, Legion members took a vow not to criticize their superiors, including Maciel.

Edward Peters, a canon lawyer who teaches at Sacred Heart Major Seminary in Detroit, has said he wonders whether the disgraced priest created the order "to assure himself of ample access to sexual targets and unaccountable funds."

The Legion now claims a membership of more than 800 priests and 2,500 seminarians in 22 countries, along with 70,000 members in its lay arm, Regnum Christi. The movement's global network includes charities, Catholic news outlets, seminaries for young boys, schools, and universities in Mexico, Italy, and elsewhere. Among its U.S. operations is the University of Sacramento in California, a seminary in Cheshire, Connecticut, and schools in Rhode Island, New Hampshire, Georgia and Texas.

The order has never publicized its finances, but its worldwide assets are estimated to have grown into the billions of dollars.

The case against Maciel has long been seen as emblematic of Vatican inaction on abuse complaints - specifically under Pope John Paul II.

John Paul championed the group for its loyalty, traditionalism and success recruiting men to religious life at a time when seminary enrollment generally was dismal. The late pontiff did not waver in his public support after nine ex-Legionaries filed a canon law case at the Vatican against Maciel in 1998, and after broad news coverage of the many claims against the priest.

Maciel's - and the Legion's - reputation began unraveling in 2006 when the Vatican, under Pope Benedict XVI, invited the founder to a "reserved life of prayer and penance" - making him a priest in name only. The Holy See never said specifically why the punishment was imposed, but the announcement came after Benedict had bucked Maciel's many supporters in the Vatican and relaunched an investigation into the molestation claims.

In 2007, Benedict abolished the Legion's secrecy vow. Then last year, the order began slowly disclosing some of Maciel's wrongdoing. Legion leaders confirmed that Maciel had a daughter, and last month acknowledged that he abused seminarians, although the Legion said nothing about how widespread the abuse had been. In Mexico, a woman recently came forward saying she had a long relationship with Maciel and had two sons by him, who she said the priest later abused.

Ahead of the Vatican announcement, Legion officials have been steadily announcing changes meant to demonstrate the movement is reforming. The order has revised a prayer book and dropped a fidelity prayer that included references to Maciel as a role model, according to Jim Fair, a U.S. spokesman for the Legion. The Legion said it had enacted a safe environment for children that was accredited by Praesidium, the same risk-management company hired by U.S. religious orders following the 2002 clergy sex abuse scandal.

Yet there are already signs the group is weakening from the revelations.

Property in Orange, Connecticut, that the Legion once used for its U.S. headquarters is now on the market. Earlier this month, the order abruptly closed its Southern Catholic College in Georgia. The Legion bought the school last year, but said it could not raise enough money to stay open.

Jose Barba, a professor in Mexico and one of the men who filed the canon law case against Maciel, said he knew of three victims who were recently contacted by Corcuera, the Legion general director, although Barba did not know the details of their conversation.

Barba said he had not been personally contacted by Corcuera, but would not meet with him if asked. Legion officials vilified the accusers and anyone who wrote about the allegations as conspirators in a plot to destroy the founder.

"I know the modus operandi of the Legion," Barba said in a phone interview, "and they cannot be trusted."