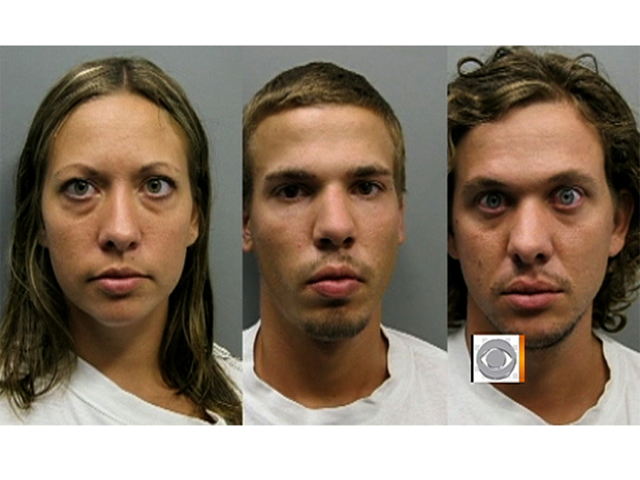 (CBS/AP) WALSENBURG, Colo. - One of three fugitive Dougherty siblings who were the focus of a nationwide search last summer will have to serve at least nine years in prison after pleading guilty in Colorado to reduced charges.

Lee Grace Dougherty, 29, pleaded guilty on Thursday to one count of attempted first-degree assault and two counts of felony menacing.

As part of the plea agreement, prosecutors agreed to drop 21 other charges. Prosecutors had originally charged her with five counts of attempted second-degree murder and other felonies related to the trio's capture following a chase in southern Colorado on Aug. 10.

She faces a maximum of 28 years in prison when she is sentenced on April 30.

There's nothing in the deal that requires her to testify against her brothers, Ryan Dougherty, 21, and Dylan Stanley-Dougherty, 26. Authorities have also discussed possible deals with them.

The trio is accused of shooting at a police officer in Florida, as well as robbing a Georgia bank.

Judge Claude Appel agreed to let Dougherty serve her Colorado sentence at the same time as any other sentences that may arise from convictions in Georgia and Florida. Appel noted there's a federal case pending in Georgia, and possibly a case pending in Zephyr Hills, Fla.

The most serious charge Dougherty pleaded guilty to, attempted first-degree assault, was for pointing a gun at Walsenburg, Colo. police chief James Chamberlain, who watched the proceedings from a back bench.

Chamberlain shot Dougherty in the knee after the trio rolled their vehicle and Dougherty got out and pointed a gun at him. "I deserved to get shot," Lee Grace Dougherty allegedly told investigators shortly after being arrested.