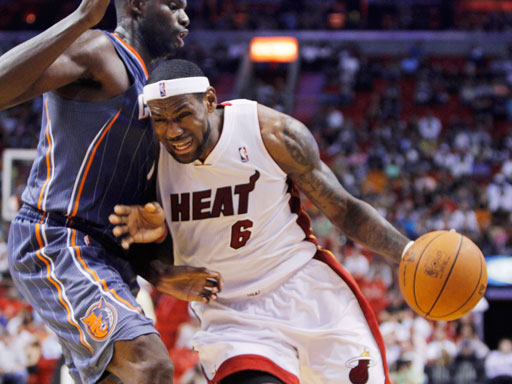 Lebron James has never made his presence felt in Cleveland quite like this. There was no signing autographs, no banter with fans or any sort of welcome-mat reception. Instead, the two-time-MVP and seven-time All-Star returned to his hometown at 3:30 Thursday morning to a city and team that still looks at his "decision" to play basketball in Miami as nothing short of betrayal.

James spent much of today at the Ritz Carlton Hotel just blocks from the court he dominated for seven seasons with the Cavaliers. He took in several meetings and sat for tea with friends, but so far has refused to address the media.

During the morning press conference, Cavaliers Head Coach Byron Scott jokingly remarked about how there was a little more media for the 18th game of the season than usual, but acknowledged this is no ordinary game calling it "...the biggest 18th game in NBA history." No doubt it's a homecoming that everyone has had marked on their calendar since July 8, but Scott implored fans to be "respectful and professional." He said he hopes his team can avoid distraction and come out with a win.

Certainly James will get booed throughout the game but Cavalier executives have promised extra security, are not using bottles in the arena, and plan to confiscate any inappropriate signs that include profanity. Although, it's early in the season tonight's contest will likely be filled with same electricity and energy of an NBA finals game. Here's to hoping the players give it their all and leave it all out on the floor.

Millions locked down in China