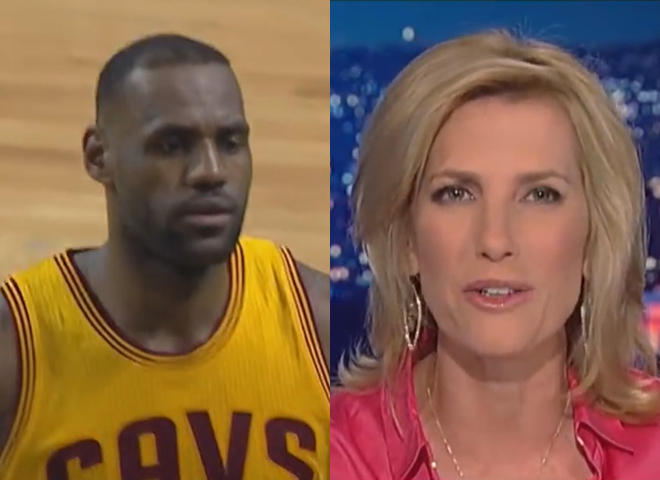 "The number one job in America, the point-of person, is someone who doesn't understand the people, and really don't give a f*** about the people," James said. "While we cannot change what comes out of that man's mouth, we can continue to alert the people that watch us, that listen to us that this is not the way."

"Must they run their mouths like that?" she said. "This is what happens when you attempt to leave high school a year early to join the NBA. Keep the political commentary to yourself. Or as someone once said, shut up and dribble."

"It'd been the same as telling Jackie Robinson to shut up and slide into home base, or Jesse Owens to shut up and just go triple jump," James said. "I can't do that, because of so many people that's looking up to me, and so many that's going to come after me."

In a statement, Ingraham defended her comments, saying "In 2003, I wrote a New York Times bestseller called 'Shut Up & Sing' … I have used a variation of that title for more than 15 years to respond to performers who sound off on politics … There was no racial intent in my remarks."

In December, she used the same expression to criticize comedian Jimmy Kimmel for making political remarks on his talk show: "Shut up and make us laugh every now and then."

NBA Commissioner Adam Silver said that he was proud of the way James handled the criticism, and how he speaks out on social issues.

James said he will continue to do so.

And in a tweet, Ingraham invited James to come "play on her court" and be a guest on her show.