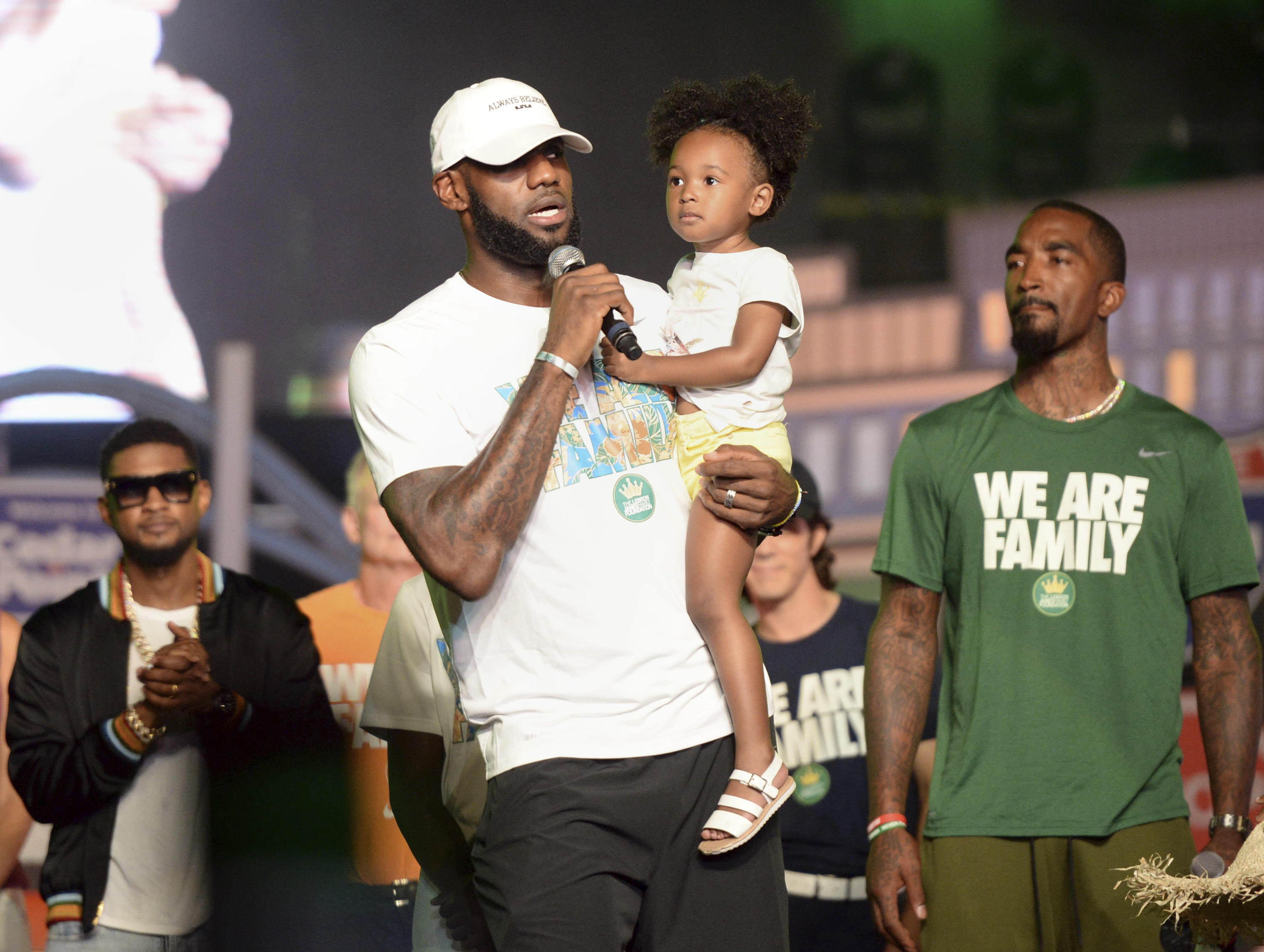 SANDUSKY, Ohio -- LeBron James went after President Trump in an emotional speech on Tuesday night, calling him the "so-called president" while calling for unity in light of the Charlottesville tragedy.

Standing on stage before students, parents and families connected to his foundation at the end of a daylong event at Cedar Point Amusement Park, James said he wanted to spend a moment addressing the weekend's violent protests, where a woman was killed amid ugly clashes between far-right extremists and protesters out to stop them.

While holding his baby daughter, James turned his thoughts to the violence.

"I know there's a lot of tragic things happening in Charlottesville (Virginia)," James said. "I just want to speak on it right now. I have this platform and I'm somebody that has a voice of command and the only way for us to get better as a society and for us to get better as people is love. And that's the only way we're going to be able to conquer something as one. It's not about the guy that's the so-called president of the United States, or whatever the case."

Earlier in the day, the NBA superstar blasted Mr. Trump on Twitter after the president appeared to equate the actions of white supremacists and those protesting them.

Former NBA superstar Kobe Bryant took to Twitter Tuesday to weigh in on the president's comments.

James has been outspoken on his political beliefs in the past -- he endorsed Hillary Clinton in last year's election, introducing her at a rally in Cleveland just two days before she lost to Mr. Trump -- and took advantage of his first public appearance since the NBA Finals to call out Mr. Trump's actions.

"It's not about a teacher that you don't feel like cares about what's going on with you every day," James continued. "It's not about people that you just don't feel like want to give the best energy and effort to you. It's about us. It's about us looking in the mirror. Kids all the way up to the adults. All of us looking in the mirror and saying, 'What can we do better to help change?' And if we can all do that and give 110 percent, then that's all you can ask for.

James was joined on stage by his three children, singers Usher and Jordin Sparks, who performed during the event, and Cavaliers teammate J.R. Smith.

This isn't the first time James has used his status to take on social issues -- or take a swipe at Mr. Trump.

During the season, James was asked if the All-Star voting was "goofy" because players were involved in the balloting.

He has taken a far more serious tone on other matters. When he was with Miami, James and his teammates wore hooded sweatshirts to protest the deadly shooting of teenager Trayvon Martin. He also wore an "I Can't Breathe" T-shirt when the Cavaliers were in Brooklyn as a tribute to Eric Garner, who had been choked to death in a struggle with police.