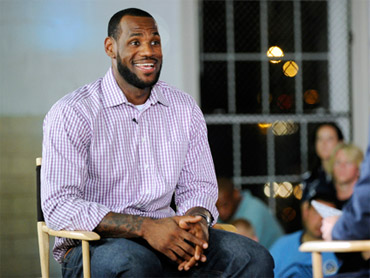 In an appearance on Wednesday night's edition of "Primetime" on CNN, LeBron James replied that he thought race was a factor in the negative response to his decision to leave Cleveland for the Miami Heat.

"I think so, at times," he told CNN correspondent Soledad O'Brien. "It's always, you know, a race factor."

Some are likely rolling their eyes, but in a way, the statistics back it up.

Q Score is a poll that measures popularity and LeBron dropped (or jumped, depending on how you look at it) to No. 6 on the list. But among non-blacks, James' negative Q rating went from 24 percent to 44 after his free-agency announcement. However, among blacks, his negative Q Score slipped just from 14 percent to 15 percent.

LeBron's adviser and marketing guru Maverick Carter was also part of the interview and he agreed about the role of race in the media backlash. "It definitely played a role in some of the stuff coming out of the media, things that were written for sure," Carter said.

I don't really know how to touch this topic so I'll kind of stay away and let you decide yourself on it. But as to why one color of people reacted differently to LeBron's decision than the other, I don't know. I don't even want to really take a guess as to why.

One thing that does stick out is that James just said race played a factor and then left it at that. He didn't elaborate. He didn't fill us in. He just whipped out that big shiny race card, dropped it on the table and walked away. And as a result, the door was left wide open for people to criticize, speculate and question his use of it.

As for "The Decision" itself, James said that was his and the people around him's idea. But Carter admitted it wasn't perfect.

"The execution could have been a little better and I take some of the blame for that."

He also said something else I found interesting about LeBron's marketing approach: "It's just about control and not doing it the way it's always been done or not looking the way that it always looks."

Well evidently it's about control. A one-hour special where you control your own message and deliver it exactly how you want? Yep, that's pretty controlling. And that was a big part of the backlash over it.

But it was noted in the report that over $3 million was raised for the Boys and Girls Club of America from "The Decision." That's a good thing that's been largely ignored from that night. That's not going to save LeBron's popularity score, but still, a good thing.