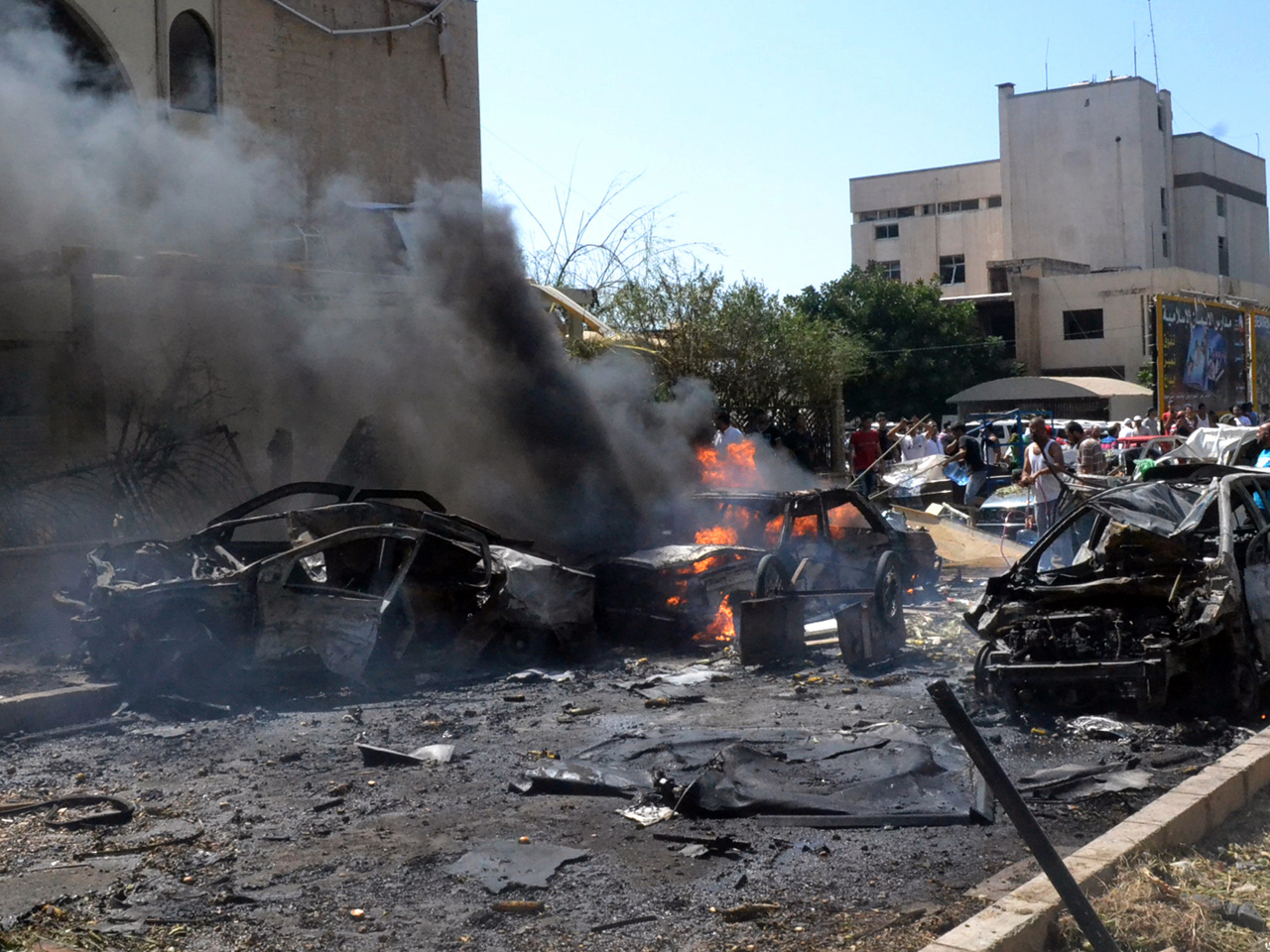 The blasts hit amid soaring tensions in Lebanon as a result of Syria's civil war, which has sharply polarized the country along sectarian lines and between supporters and opponents of the regime of Syrian President Bashar Assad. It was the second such bombing in just over a week, showing the degree to which the tiny country is being consumed by the raging war next door.

Tripoli, a predominantly Sunni Muslim city, has seen frequent clashes between Sunnis and Alawites, a Shiite offshoot sect to which Assad belongs. But the city itself has rarely seen such explosions in recent years.

Friday's blasts mark the first time in years that such explosions have targeted Sunni strongholds and were bound to raise sectarian tensions in the country to new levels. It was also the most powerful and deadliest in Tripoli since the end of the civil war.

Attacks have become common in the past few months against Shiite strongholds in Lebanon, particularly following the open participation of the militant Shiite Hezbollah group on behalf of Assad in Syria's civil war.

On Aug. 15, a car bomb rocked a Shiite stronghold of Hezbollah in the southern suburbs of Beirut, also killing 27 people and wounding over 300. A less powerful car bomb targeted the same area on July 9, wounding over 50.

There was no immediate claim of responsibility for Friday's attacks, which raised the ominous specter of Iraqi-style tit-for-tat explosions pitting Sunnis against Shiites.

Samir Darwish, a 47-year-old contractor, said he was in a Tripoli square when he heard the first explosion and ran in the direction of the fire to the Salam Mosque, one of the two targeted.

"I came here and saw the catastrophe. Bloodied people were running in the street, several other dead bodies were scattered on the ground," he said. "It looked like doomsday, death was everywhere."

Hezbollah swiftly condemned the bombings, calling it a "terrorist bombing" and part of a "criminal project that aims to sow the seeds of civil strife between the Lebanese and drag them into sectarian and ethnic infighting."

In a strongly worded statement, the group expressed "utmost solidarity and unity with our brothers in the beloved city of Tripoli."

The explosions shattered windows in apartment blocks over a wide area and triggered car fires that left the charred bodies of trapped people inside. In the aftermath of the bombings, bloodied people could be seen being ferried away by screaming residents. Gunmen took to the streets, firing in the air in anger, which delayed the arrival of army troops and investigators.

Local media and mosques called for blood donations following the blasts, as hospitals were overwhelmed with the dead and wounded.

Security officials said the blasts went off on the Muslim day of prayer, when places of worship would be packed. An official said one of the blasts exploded outside the Taqwa mosque, the usual place of prayer for Sheik Salem Rafei, a Salafi cleric opposed to Hezbollah, which holds sway in much of the country. It was not clear whether he was inside the mosque, but the National News Agency said he wasn't hurt.

The official said the blast went off as worshippers were streaming out of the mosque. He spoke on condition of anonymity in line with regulations.

The second car bomb explosion went off about five minutes later in the Mina district of Tripoli, about five meters from the gate to the Salam Mosque. The explosion blew open a 5-meter-wide and 1-meter-deep crater outside the mosque. Damaged cars surrounded the area, at least half a dozen of them totally charred.

The preachers of both mosques are virulent opponents of Assad and Hezbollah.

Former Prime Minister Fuad Saniora, a senior leader in the Western-backed, anti-Hezbollah coalition in Lebanon, called on the group to withdraw its fighters immediately from Syria, saying its involvement in the war has opened the door to terrorist threats in Lebanon.

Saniora also suggested the goal of Friday's bombings was to "deviate from the massacres being committed by the Syrian regime."

The U.S. Embassy in Lebanon condemned the bombings and in a statement called on all parties to exercise calm and restraint.