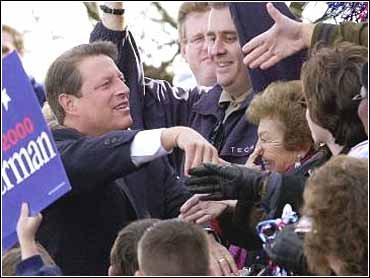 Vice President Al Gore told a group of Arab-Americans in a private meeting in Michigan on Sunday that now is the time for them to have a "place at the table" of American life, a participant says.

The participant said Gore also said he, unlike George W. Bush, opposes moving the U.S. Embassy in Israel from Tel Aviv to Jerusalem.

However, a Gore aide denied afterward that the vice president told the Arab-American group he opposed the embassy move.

"If there was a time for Arab-Americans to have a full place at the table it's now," Gore said, according to Abed Hammoud, president of the Arab American Political Action Committee that gave Bush the endorsement.

Gore "set the record straight, so now we know where he stands," Hammoud said.

"I wish we could have had this a long time ago," said Hammoud, who was a delegate at this year's Democratic National Convention. "It would have made my job as a Gore delegate much easier because this is good stuff."

Gore defended the position his administration has taken on the Middle East, participants said. But, Gore said, "there is no conflict between being a friend to Israel and a friend to Arab-Americans," Hammoud said.

"I have refused to support the moving of the embassy to Jerusalem. My opponent wants to do that as soon as he goes into office," Gore said, according to Hammoud.

Senior campaign adviser Greg Simon, who sat in on the meeting, said Gore did not state a position on whether the embassy should be relocated. Instead, according to Simon, Gore explained to the Arab-Americans: "In some areas, I have been criticized for not supporting those who want the U.S. embassy in Jerusalem now."

Gore further explained that his view is "consistent with the administration's position of refusing to reach a decision regarding our embassy before the final status talks regarding Jerusalem are completed," Simon said.

Added Simon, "The vice president did not say, 'I'm opposed to moving our embassy, period.'"

"The vice president's position has been the same as the Clinton-Gore administration's," Lehane said. "The discussion of the embassy should be part of the peace negotiation process, which has been our view since the Oslo accords took place."

Gore said he would have an even-handed policy in the Middle East, "which is what the Arab-American leaders have been asking for," Hammoud said.

"Our people want to vote Democratic," said Ronald Amen, treasurer of the Islamic Center of America and one of about two-dozen participants at a hotel in nearby Dearborn, Mich. "The majority of our people are Democrats. We are blue-cllar workers. That is the root of this community. He was preaching to the choir."

"This meeting would have helped, but it would have been a major help in the community if he would have made these positions known publicly," Hammoud said. An estimated 250,000 to 300,000 Arab-Americans live in the Detroit area.

Imam Mohamad Ali Elahi, the director and spiritual leader of the Islamic House of Wisdom in Dearborn said Gore's image in the Arab-American community is that he is pro-Israeli and that "he may not actually help the administration to be an honest broker in the peace process in the Middle East.

"He committed himself to be honest in the situation in the Middle East and to be objective about the issues and listen to both sides," Elahi said.

Gore told them he strongly supports a bill by Michigan U.S. Rep. David Bonior - the House minority whip - on using secret evidence in deportation cases. Arab-American leaders say their people have been targets of such evidence.

"Secret evidence is completely abhorrent to everything the United States stands for," Gore told the group, according to Hammoud.

"This is great. We never heard him say that," Hammoud said.

Bush criticized use of secret evidence during his second debate with Gore.

Gore told the Arab-Americans that they are applying a double-standard to him, expecting more of him than of Bush, Hammoud said. He said Gore told the group he does not know why.

"It was obvious to me that he was very well aware of our issues and he wanted to address each one of them," Hammoud said.

Elahi said it was good for Gore to listen to their concerns and let them know where he stands.

"Any time a candidate comes and communicates with the people it may have an affect on the situation," Elahi said. "His time is short but I'm sure all communication is helpful."

After the meeting, Gore took to the pulpit at black churches in the Detroit area to encourage a big Election Day turnout by a key Democratic constituency. Later in the day, the vice president and his running mate, Joe Lieberman, began a two-day bus tour of Michigan and Wisconsin.

Bush took Sunday off, but was courting Hispanics long-distance in advance of another West Coast campaign swing. The GOP governor was resting at home in Texas, but planned an evening satellite address to a meeting of Latinos for Bush in Anaheim Hills, Calif., California, laying the groundwork for a swing through the Golden State later in the week.