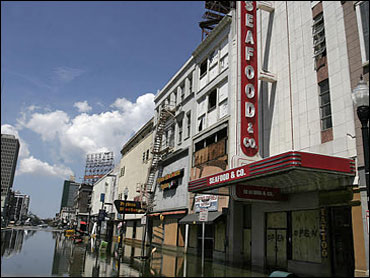 Soldiers and police confiscated guns from homeowners as they went house to house, trying to clear the shattered city of New Orleans of holdouts because of the danger of disease and fire. Police on Friday also marked homes with corpses inside, with plans to return later.

As many as 10,000 people were believed to be stubbornly staying put in the city, despite orders from Mayor Ray Nagin earlier this week to leave or be removed by force. By midmorning, though, there were no immediate reports of anyone being taken out forcibly, police said.

"We will take a minimal amount of force. We understand this is a traumatized community," said New Orleans Police Superintendent Eddie Compass.

"Some areas where the water is it's just black. And it's not just dirty, it's toxic," said Dr. James Moises of Tulane Hospital.

"It's getting to the point where they're delirious," Rule said. "A couple of them don't know who they were. They think the water will go down in a few days."

Authorities are now faced with the challenge of how to identify bodies that may be bloated and decayed beyond recognition.

At two collection sites, federal mortuary teams were collecting information that may help identify the bodies, such as where they were found. Personal effects were also being logged.

At the temporary morgue set up in nearby St. Gabriel, where 67 bodies had been collected by Thursday, the remains were being photographed and forensic workers hope to use dental X-rays, fingerprints and DNA to identify them.

Dr. Bryan Patucci, coroner of St. Bernard Parish, said it may be impossible to identify all the victims until authorities compile a final list of missing people.

Decaying corpses in the floodwaters could pose problems for engineers who are desperately trying to pump the city dry. While 37 of the 174 pumps in the New Orleans area were working and 17 portable pumps were in place Thursday, officials said the mammoth undertaking could be complicated by corpses getting clogged in the pumps.

"It's got a huge focus of our attention right now," said John Rickey of the Army Corps of Engineers. "Those remains are people's loved ones."

Some 400,000 homes in the city were also still without power, with no immediate prospect of getting it back. And fires continued to be a problem. At least 11 blazes burned across the city Thursday, including at historically black Dillard University where three buildings were destroyed.

Also Thursday, Congress rushed through an additional $51.8 billion for relief and recovery efforts and President George W. Bush pledged to make it "easy and simple as possible" for uprooted storm victims to collect food stamps and other government benefits.

In an attempt to stem the criticism of the slow federal response to the disaster, Vice President Dick Cheney also toured parts of the ravaged Gulf Coast, claiming significant progress but acknowledging immense obstacles remained to a full recovery.

Meanwhile, Democrats threatened to boycott the naming of a panel that Republican leaders are proposing to investigate the administration's readiness and response to the storm. Senate Democratic leader Harry Reid said it was like a baseball pitcher calling "his own balls and strikes."

Democrats have urged appointment of an independent panel like the Sept. 11 commission.