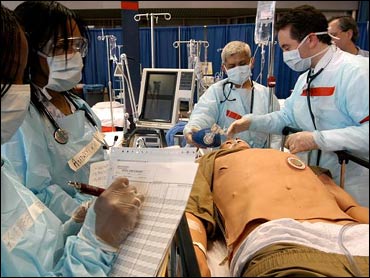 Too busy to take a four-hour CPR course? New research shows the lifesaving procedure can be effectively taught in 25 minutes.

The finding, presented Sunday at an American Heart Association meeting in Dallas, could broadly expand the number of Americans who can perform CPR.

"It's brilliant," said Dr. Lance Becker, director of the Emergency Resuscitation Center at the University of Chicago. "I think it's going to make our ability to train people much, much easier."

The study, led by Dr. Ahamed Idris, professor of emergency medicine at the University of Texas Southwestern Medical Center in Dallas, found that just five minutes of training on defibrillator use and 20 minutes of instruction in CPR was as effective as the standard four-hour course.

Idris said it makes sense that the shorter course was just as memorable: "The more you have to remember, the more likely you are to forget," he said.

The study used American Airlines employees and compared standard training to a short course taught by DVD. Participants were tested by performing cardiopulmonary resuscitation on a computerized mannequin that took data on chest compression and ventilation. Their performance was also reviewed and graded by instructors.

The 150 people who took the short course did as well or better than the 118 who received standard training. More importantly, retention rates of knowledge remained similar six months later.

People suffering cardiac arrest can die in minutes unless they get effective CPR and sometimes a shock to the heart from a defibrillator, which restores a normal heart rhythm.

Defibrillators are becoming more common in schools, airports and other public places, but the key is having people nearby who are trained to use them.

Having a short course should help meet the heart association's goal to double in the next five years the number of Americans trained annually in cardiopulmonary resuscitation - currently about 8 million. The time commitment for a four-hour course seemed to be a stumbling block in getting people trained, officials said.

"It's very difficult for a company to release their employees for four hours to take a CPR course," Idris said.

The study was funded by Laerdal Medical, maker of the training DVD, the heart association, and device maker Philips Medical.