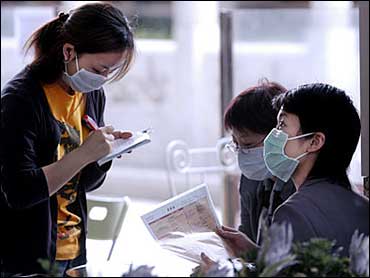 The biggest SARS outbreak in Hong Kong spread through the plumbing in an apartment complex after visits from a man sick with the disease, a health official said Thursday.

Water droplets contaminated with the SARS virus may have been sucked out of bathroom drains into apartments by ventilation fans, said the Hong Kong health secretary, Dr. Yeoh Eng-kiong.

The disease - severe acute respiratory syndrome, or SARS, apparently also was spread through person-to-person contact and possibly by rats and cockroaches, Yeoh told a news conference.

The outbreak at the Amoy Gardens apartment complex was traced to a mainland Chinese man visiting his brother in March. The man's symptoms included diarrhea and his use of the bathroom helped set in motion a chain of events that eventually sickened 324 people from the apartments, an official report found.

Many who came down with SARS in the Block E building of the apartments also got diarrhea, spreading the disease further through faulty seals between sewage and water drains, Yeoh said.

The outbreak at Amoy Gardens has been the most alarming yet in the former British colony, which has reported 65 SARS deaths. Worldwide, SARS has infected more than 3,300 people and more than 160 people have died, most in Asia.

Block E building was temporarily evacuated, and Yeoh said the outbreak has now been contained.

"We were scared at first, but after the isolation, we haven't seen any outbreak like what we had before," said one resident, Anna Yuen, 45, who lives in Block E with her husband and three children.

The World Health Organization announced Wednesday that scientists have confirmed the identity of the SARS virus, a key step toward finding drugs to combat the disease.

The disease, which emerged in southern China in November, has been spread primarily by travelers or those in contact with them.

India, the world's second-most-populous nation, reported its first SARS case Thursday - a 32-year-old man who contracted the disease after traveling to Hong Kong and Singapore.

Beijing universities said Thursday they have canceled activities and some classes to prevent the spread of SARS, breaking with earlier official insistence on continuing public events.

Thailand's public health minister said Southeast Asian leaders would meet in Bangkok on April 29 to discuss ways to stop the disease, which is devastating the region's airlines, hotels and other businesses.

"SARS, for sure, will have an influence on the economy's performance in China," said Yao Jingyuan, an economist at China's National Bureau of Statistics.

Malaysia, meanwhile, lifted restrictions imposed last week on tourists from China, Hong Kong, Taiwan, Vietnam and Canada because it is satisfied with efforts in those places to contain SARS, a government official said.

In releasing the report on Amoy Gardens, Hong Kong health officials said there was no evidence SARS has been an airborne disease. But they discussed a "chimney effect" in which contaminated water droplets from a leak in Block E had apparently risen through an air shaft and into some apartments.

Yeoh said if SARS had spread through the air, "We're not talking about 300 cases. It would be thousands, tens of thousands."

SARS also was apparently spread in Amoy Gardens through person-to-person contact and in common areas, such as elevators, lobbies and staircases.

"We are watching with great concern the events in other parts of the world, particularly in China and Hong Kong and Singapore, where there is ongoing transmission of this virus at a very accelerated pace," Centers for Disease Control director Julie Gerberding told reporters Thursday.

The California Department of Health Services reports that there are now 43 suspected or confirmed cases of severe acute respiratory syndrome, or SARS, statewide. No U.S. patients have died, although cases are reported in 34 states.

What keeps SARS from spreading as quickly in this country as elsewhere is early detection and isolation, she said.

"We're a talking about a virus here, not an environment or a class of people."

The Coast Guard is now part of the effort to prevent the spread of the disease, reports Larry Chiaroni of KCBS-AM. Incoming ships, especially those from Asia, are being screened for any suspected cases.

"It's being done before the vessel comes into San Francisco Bay," said Lt. Lexia Littlejohn.

So far, no cases of SARS have turned up, but if one does, "that vessel is not allowed to proceed to port until it's first cleared and evaluated by the CDC," she added.