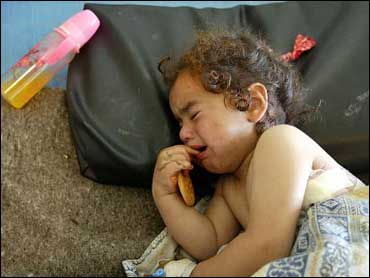 A newspaper on Saturday published what it claimed were excerpts from a leaked government memo in which British officials expressed misgivings over U.S. tactics in Iraq.

The Sunday Times said the Foreign Office document described some American military tactics as "heavy-handed" and claimed that the Iraqi prisoner abuse scandal had dented the coalition's moral authority.

Prime Minister Tony Blair's office couldn't immediately comment on the report. No one was available for comment at the Foreign Office late Saturday.

Blair has resisted calls from some in his Labour Party to distance himself from U.S. President George W. Bush, following the images of Iraqi detainees being humiliated and mistreated by American soldiers at Baghdad's Abu Ghraib prison.

In a newspaper interview earlier this month, Blair dismissed "this idea that at the time of maximum difficulty you start messing around your main ally."

The Sunday Times quoted the leaked memo as indicating "the need to redouble our efforts to ensure a sensible and sensitive U.S. approach to military operations. The message seems to be accepted at the highest levels but not always implemented lower down the command chain."

The newspaper said the memo was dated May 19 and circulated to senior ministers and officials last week.

"Heavy-handed U.S. military tactics in Fallujah and Najaf some weeks ago have fueled both Sunni and Shiite opposition to the coalition, and lost us much public support inside Iraq," The Sunday Times quoted the memo as saying.

"The scandal of the treatment of detainees at Abu Ghraib has sapped the moral authority of the coalition, inside Iraq and internationally," the document also reportedly said.

Earlier Saturday, hundreds of anti-war protesters marched through London, calling for coalition troops to be withdrawn from Iraq and an end to the abuse of Iraqi prisoners.

The march was headed by a number of demonstrators dressed as coalition soldiers who pretended to torture other protesters wearing black hoods, in scenes reminiscent of photographs of the alleged torture of Iraqi prisoners by U.S. soldiers.

Cracks between the United States and Britain started showing in late April - when more than 50 former British diplomats signed an open letter to Blair.

The letter said people with very wide experience in the Middle East are hearing on all sides how current policies are going down badly.