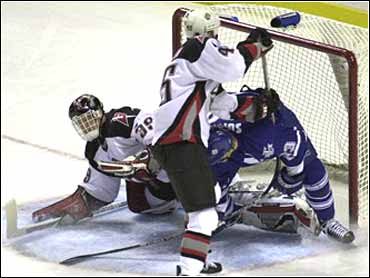 Toronto played Buffalo for 130 minutes in two countries in a 72-hour span, and the only thing the Maple Leafs accomplished was to end a three-game losing streak at Buffalo.

The teams tied 3-3 on Friday, their second draw in three nights.

"It was a high-intensity game. Both teams had some chances," Buffalo goalie Dominik Hasek said. "We were closer to win, I think. We cannot be happy with a tie."

"We'd like to have two wins and it's better than two losses," Healy said. "This building has been nothing but a nightmare for us, so a point, we'll take it."

Tomas Kaberle tied his career-high with three assists and Mats Sundin scored his 14th goal of the season for Toronto. Jonas Hoglund and Sergei Berezin also scored for the Leafs, who last won in Buffalo on Feb. 17, 1999.

"Tonight and Wednesday night, terrific to watch and terrific to be involved in," Toronto coach Pat Quinn said. "Maybe those were the just results at the end of the night."

The Leafs had a golden opportunity in overtime. With approximately 2:40 remaining, Toronto defenseman Dave Manson hit the right post with a slap shot.

"It was about si inches above the ice, hit the end of my stick right over my pad and hit the post," said Hasek, who finished with 14 saves. "It could've been a fluky goal, but I'm glad it hit my post."

The Sabres had a chance of their own in the extra period when Gilmour fed the puck ahead to Buffalo forward Maxim Afinogenov. Afinogenov crossed in front of the Toronto goal, cut back and flipped a backhander that Healy smothered.

"He made a good play," said Healy, who had 22 saves filling in for Curtis Joseph. "He got it up and I squeezed it with my arm and my blocker."

With the Sabres down 3-2 in the second, Zhitnik tied it with a power-play goal. From just inside the blue line, Zhitnik drilled a slap shot past Healy, who was screened by his teammates. The goal was the first in 20 games for Zhitnik, who was criticized early in the season for not getting his shots on net during power-play opportunities.

The Leafs had taken the lead earlier in the period when Berezin punched a rebound of Kaberle's shot.

"We had seven 2-on-1s in the game and I don't believe we had a shot on goal," Buffalo coach Lindy Ruff said. "The only way you can hurt a team if they start stepping up like that is to take advantage of the situations."

The Leafs entered and exited the two-game stretch three points ahead of the Sabres for first place in the Eastern Conference's Northeast Division.

"When you're trying to fight for first overall in the conference you're going to have emotions running high," Toronto forward Darcy Tucker said. "Both teams wanted to win this one really bad and it was a really entertaining hockey game."