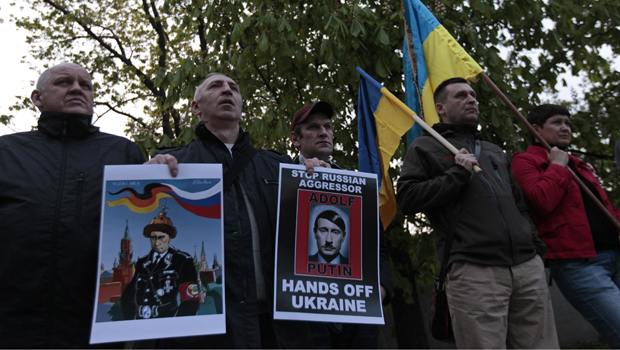 WASHINGTON - The United States on Thursday condemned as "grotesque" the distribution of leaflets demanding that Jews in eastern Ukraine register with a self-proclaimed local authority or face consequences. U.S. officials also denounced other instances of religious intolerance that are inflaming tensions the crisis in Ukraine and said no such behavior could be tolerated.

Speaking in Geneva after top diplomats from the U.S., European Union, Russia and Ukraine reached agreement on steps to de-escalate the situation, Secretary of State John Kerry denounced the leaflets.

"In the year 2014, after all of the miles traveled and all of the journey of history, this is not just intolerable; it's grotesque," Kerry told reporters. "It is beyond unacceptable. And any of the people who engage in these kinds of activities, from whatever party or whatever ideology or whatever place they crawl out of, there is no place for that."

In Washington, U.S. officials said the anti-Semitic leaflets, which recall the days of czarist pogroms and Nazi-era persecution of Jews, have appeared recently in the eastern Ukrainian city of Donetsk. The State Department said it was looking into who is responsible but said it took the threat seriously no matter who was behind the leaflets.

The leaflets seen by U.S. officials purport to come from the Donetsk People's Republic, a self-styled, unrecognized breakaway authority that seeks to join Russia. The Donetsk Republic press office denied any involvement in the matter and says the leaflets are fake.