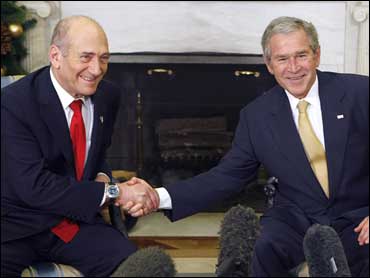 President Bush stepped cautiously into the most direct Mideast peacemaking of his administration on Monday, meeting separately with the leaders of Israel and the Palestinian Authority to explore whether peace is possible. "Difficult compromises" will be required but the Israeli and Palestinian leaders are committed to making them, he said.

The Mideast peace conference in Annapolis, Md., is to launch the first direct peace talks between Israel and the Palestinians of Bush's nearly seven years in office, and has attracted Arab and other outside backing.

Both sides, and the Bush administration, have repeatedly expressed hopes that the decades-old conflict over land sacred to Muslims, Jews and Christians, can be resolved amicably within a year. CBS News senior White House correspondent Bill Plante says the president is "shooting for the fence."

Israeli and Palestinian leaders were unable to frame a blueprint for the talks before they came to the United States, and negotiations over the text were expected to continue into Tuesday.

Speaking Monday to CBS News on the condition of anonymity, an Israeli official in Washington said, "If we do succeed in coming up with a statement, it will be at the eleventh hour."

At an evening dinner at the State Department for members of some 50 delegations invited to the talks, Bush toasted the effort and told the guests: "We've come together this week because we share a common goal: two democratic states, Israel and Palestine, living side-by-side in peace and security. Achieving this goal requires difficult compromises, and the Israelis and Palestinians have elected leaders committed to making them."

Bush earlier emerged from an Oval Office meeting with Israeli Prime Minister Ehud Olmert and told him: "I'm looking forward to continuing our serious dialogue with you and the president of the Palestinian Authority to see whether or not peace is possible. I'm optimistic. I know that you're optimistic."

Next, he met with Palestinian President Mahmoud Abbas, who stressed the need to address issues of Palestinian statehood, sticking points that have doomed previous peace efforts.

"We have a great deal of hope that this conference will produce permanent status negotiations, expanded negotiations, over all permanent status issues that would lead to a peace agreement between Israel and the Palestinian people," he said. "This is a great initiative and we need his (Bush's) continuing effort to achieve this objective."

Olmert said that international support -- from Bush and also, presumably, from the Arab nations that will attend the conference -- could make this effort succeed where others have failed.

"This time, it's different because we are going to have a lot of participation in what I hope will launch a serious process negotiation between us and the Palestinians," Olmert said. He was referring to the talks expected to begin in earnest after this week's U.S.-hosted meetings.

"We and the Palestinians will sit together in Jerusalem and work out something that will be very good," Olmert said. As to timing, he added later: "We definitely will have to sit down very soon."

The agreement that was shaping up, as Palestinian official Yasser Abed Rabbo described it, is a starting point for negotiations and sketches only vague bargaining terms. The big questions that have doomed previous peace efforts would come later.

The document was to include a formal announcement of the renewal of peace talks, Abed Rabbo said. It will set a target of concluding negotiations before Bush leaves office in January 2009. And it commits the two sides to resolving the key issues that divide them.

Chief Palestinian negotiator Ahmed Qureia said after an afternoon meeting with Rice, Israeli Foreign Minister Tzipi Livni and others that details of the document had not been finalized. "Our efforts are still going on to reach this document," he said.

A member of the Palestinian delegation, speaking on condition on anonymity because talks are still going on, said three main obstacles have emerged.

All sides have agreed that two states should be established, but the Palestinians have objected to referring to Israel as a "Jewish state."

American and Israeli officials are resisting Palestinian efforts to include language about "ending the occupation that started in 1967," referring to the Israel-occupied West Bank.

The Palestinians want the document to set a one-year timetable for reaching a resolution. The Israelis do not want this, and the Americans are open the idea.