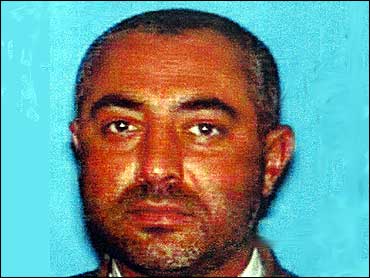 The wife of an Egyptian gunman who shot and killed two people at Los Angeles International Airport said Hesham Hadayet called her hours before the shooting. Hala Mohammed Sadeq El-Awadly said Monday from Cairo, Egypt, that Hadayet gave no hint he was planning any violent act.

She said she did not believe her husband was responsible for the shooting and was being blamed because he was Arab and Muslim.

"He is a victim of injustice," she said. "In America, they hate Islam and Arabs after Sept. 11."

"Hesham called on July 4, it was his birthday. His voice was very beautiful," she said. "He asked about the boys, asked me to take them out a lot and to review their lessons with them in order to be ready for next year."

According to the FBI, Hesham Mohamed Hadayet, 41, went to the ticketing counter of El Al, Israel's national airline, at Los Angeles International Airport July 4 carrying two handguns and a hunting knife. He opened fire at midmorning, killing two people and wounding three others before he was killed by an El Al security guard.

El-Awadly, also 41, said her husband called about midday Egypt time that day, which would have been early morning in California. She said it was not unusual for him to call at that time.

El-Awadly said she can't wear black, mourn or cry because she had not yet told her sons Omar 12, and Adam, 7, any of what had happened. She said she was thankful that their Arabic was so poor they could not understand media reports or the conversations of the adults around them, though the older boy has been asking why his father's name keeps coming up.

On Sunday in Los Angeles, hundreds of mourners turned out for the funerals of two Israelis who were gunned down.

Ticket agent Victoria Hen, 25, and Yaakov Aminov, 46, a diamond importer who had accompanied a friend to the airport, were killed by Hesham Mohamed Hadayet, who walked up to the El Al counter and began firing.

Five other bystanders were wounded before an El Al security guard fatally shot 41-year-old Hadayet, who lived in suburban Irvine.

The FBI says it has not determined whether Hadayet - an immigrant who lived in California for a decade - harbored anti-Israeli feelings. Terrorism has not been ruled out as a motive but authorities are also considering the theory that Hayadet was despondent over his personal or business affairs.

Some friends and relatives of the two people who were killed say they are not wondering about the motive.

"Yaakov Aminov died because he was a Jew, because a culture of hatred has been fostered," said Rabbi Aaron Tendler, one of the speakers at Aminov's funeral.

More than 1,000 mourners crowded the Yad Avraham Synagogue in North Hollywood and spilled into the parking lot for the Sunday morning funeral service for Aminov.

A service for Victoria Hen later in the day drew about 500 mourners to a cemetery in a Los Angeles suburb.

Several rabbis and friends eulogized Aminov at the two-hour service, said Haim Cohen, a member of the predominantly Israeli congregation.

"He was everything in a human being that can be good - kindness, helping everybody, smiling at everybody, everybody to his house. I believe he was an angel," Cohen said. "He was something for all the community."

Family and friends carried Aminov's casket through the streets from his nearby home to the synagogue. Under a heavy police presence, mourners gathered in the parking lot of a strip mall where the synagogue is located.

As family members cried and recited the traditional kaddish, or prayer for the dead, a Los Angeles police helicopter passed overhead.

After the service, pallbearers loaded Aminov's casket into a waiting hearse bound for LAX and an El Al flight to Israel, where he is to be buried on Monday.

Family members said they begged Aminov not to go to the airport on a day when Americans were braced for possible attacks on the first Independence Day since Sept. 11.

Aminov, who emigrated from Israel to the United States 14 years ago, was waiting with his friend near the El Al counter when he was struck by a bullet.

He died shortly after arriving at the hospital. His wife, Anat, pregnant with their sixth child, fainted when she learned he had not survived his injuries. Aminov also had two children from a previous marriage.

Friends described Aminov as a soft-spoken, deeply religious man, known for his generosity and for helping found the Orthodox Jewish temple where he was mourned on Sunday.

The service for Hen took on political overtones because of the presence of protesters and Jewish leaders' demands that U.S. leaders declare the shootings a terrorist incident.

At the service, Rotem criticized the Muslim community for failing to come forward and condemn the killings.

A number of Arab Americans in the Los Angeles area have, however, publicly condemned the killings as a crime. The Web site of the American-Arab Anti-Discrimination Committee posted a statement denouncing the attack in the "strongest possible terms."

The Council on American Islamic Relations in Anaheim is also speaking out.

"We are horrified by what happened," says Sabiha Khan, spokeswoman for the group. "We pray for the victims and their families because nobody should ever die like that."

Within the Muslim community, there are fears that the July 4 shooting could revive anti-Arab discrimination experienced in the aftermath of Sept. 11.

"We hope that people can make the distinction between one crazy person and a whole community of six or seven million people in the United States," said Khan.

Israelis continue to view Thursday's attack as an act of terrorism although U.S. officials downplayed the rampage as an isolated incident.

"You have to understand, the whole Jewish community in Los Angeles is taking this very hard and they are showing it with their feet," Knoller said.

Hen, who was born in Israel and came with her family to live in the United States in 1990, began working at the El Al ticket counter only a month ago. She was shot once in the chest as she sat behind her desk.

According to The Los Angeles Times, El Al is responding to the attack by beefing up security at airport terminals throughout the world.