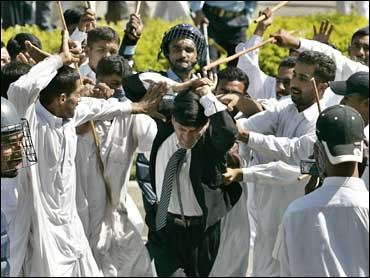 A day after the Supreme Court quashed legal challenges to Musharraf's candidacy, the Election Commission approved his nomination, a senior commission official said on condition of anonymity because he was not authorized to speak to media.

Musharraf was nominated by Prime Minister Shaukat Aziz and 16 other allies for another five-year term. Shortly after they arrived at the commission to respond to objections filed by Musharraf's opponents, about 200 lawyers - who earlier burned copies of the court ruling - tried to approach from the nearby Supreme Court building.

Television footage also showed police arresting some female supporters from Bhutto's party and shoving them into a waiting van. At least two opposition legislators also were dragged away.

Running clashes continued for more than two hours. Several journalists were beaten by police, with ARY news channel correspondent Asma Shera saying they were deliberately targeted. An AP reporter was slightly injured when a government vehicle hit him outside the Election Commission, where journalists were protesting the police tactics.

Deputy Information Minister Tariq Azim was pummeled by protesters when he arrived. He was rushed into a car by his aides and driven away.

Lawyers also rallied in Lahore and Karachi, where police arrested some and beat others.

It was the first protest in Islamabad since a crackdown on the opposition began a week ago. The government defended the arrests of hundreds of opposition activists nationwide as necessary to maintain law and order in the face of promised street protests.

But the chief justice ordered their immediate release after security forces sealed off the capital Thursday, when Musharraf's nomination papers were filed.

Ahmed's supporters held out hope that the commission might disqualify Musharraf, although analysts said that was highly unlikely.

"If the rule of law has to prevail, the Election Commission of Pakistan would not allow a serving general to contest the presidential election," said Tariq Mahmood, one of Ahmed's main aides.

The opposition alliance has said its lawmakers would quit Parliament Tuesday to protest against Musharraf's re-election bid. They were to submit their resignations to their parties later Saturday.

On Friday, the Supreme Court dismissed petitions filed by opposition parties and lawyers arguing that Musharraf was ineligible to run because he had retained his army post. The ruling triggered jubilation in the government and anger among the opposition, which vowed to keep fighting to sideline the general.

After a series of verdicts this year that undermined Musharraf's authority, many observers saw the Supreme Court as the biggest threat to the general's plan to extend his eight-year rule, particularly as the ruling coalition says it has enough support to win his re-election in the vote by federal and provincial lawmakers.

Presiding Judge Rana Bhagwandas gave only a cursory explanation of the ruling, which drew howls of protests from black-suited lawyers in the gallery of the packed courtroom.

Musharraf, who seized power in a 1999 coup, has faced growing opposition since his failed attempt to oust Pakistan's top judge in March. He is also struggling to contain growing Islamic militancy and growing public sentiment that his alliance with Washington has fanned extremism.

But he has tried to retake the initiative in recent weeks.

The general has pledged to give up his powerful post as army chief if he wins the election and restore civilian rule in a country that has lurched between unstable elected governments and military regimes during its 60-year history.

At the same time, he has clamped down on his most vociferous opponents.

The government has insisted all along that Musharraf is a qualified candidate, and declared Friday's ruling a milestone on Pakistan's path back to democracy.