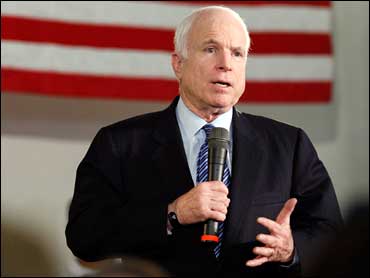 A pair of lawyers - one Republican, one Democrat - have concluded that John McCain's 1936 birth outside the continental United States does not disqualify him to be president.

The likely Republican nominee was born on a U.S. naval base in 1936 in the Panama Canal Zone.

A federal judge in California has been asked to determine whether McCain meets the legal test to hold the nation's highest office. Although McCain has called questions about his eligibility nonsense, his campaign, as it did in his first White House run in 2000, sought a review from legal experts to put the issue to rest.

The Constitution requires that only "natural born" citizens hold the presidency. But the Founding Fathers did not elaborate on the term, and the meaning of the phrase has long been debated.

A two-page complaint filed March 6 in U.S. District Court in Riverside, Calif., argued that a judge should step in because the constitutional language was not precise, opening questions about McCain's standing. It was filed by Riverside lawyer Andrew Aames, who says he's a registered Republican but previously was a Democrat.

The Panama Canal Zone was a U.S. territory when McCain was born on Aug. 29, 1936. His father was stationed there in the Navy, and his mother was an American citizen.

Missouri Sen. Claire McCaskill, a prominent Obama backer, has introduced legislation that would define a "natural born citizen" as anyone born to any U.S. citizen while serving in the active or reserve components of the U.S. armed forces. Obama is a co-sponsor of the bill.