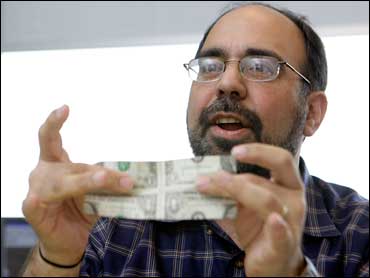 Leventhal is a self-trained magician who sometimes practices his craft in court. He uses dollar bills, playing cards and other tools of the trade to remind jurors that what we think we see might just be an illusion.

"I'm not making a mockery of anything. I'm hammering home a point," the affable Leventhal said Friday in his prop-filled office in a Philadelphia skyscraper.

In a recent construction accident lawsuit, an opposing lawyer asked the judge to ban any such tricks. They settled the case before trial, but Leventhal still filed an objection. He argued for the right to entertain "underpaid, extremely bored" juries - and to make his point.

"Anecdotal stories, biblical references and turning to examples of pop culture icons have long been used by innovative trial counsel at time of closing to hammer their trial themes home," Leventhal, 47, said in his written response, first reported by The Legal Intelligencer, a daily legal newspaper in Philadelphia.

Leventhal's first trial involved an accident on the bay near Atlantic City. He was defending against a claim that the wake from his client's boat - coincidentally named The Illusion - caused another boat to bang against a dock and crush a man's foot.

At the 1990 trial, he borrowed a dollar from the plaintiff's lawyer during closing arguments. He waved it before the jury and magically produced a $100 bill a moment later.

He then asked: "Was it my client's boat, or was it merely an illusion?"

The jury took just 18 minutes to return a verdict in Leventhal's favor. And the judge had him repeat the trick for colleagues.

Leventhal developed his love of magic growing up at a Bucks County hotel run by his parents. He would exchange tips with guests and sometimes perform. While a college junior in Tel Aviv, he also worked as a street performer in Paris, Amsterdam and the Soviet Union.

"All you need, really, is a bag of tricks," said Leventhal, who also performs magic for pay at law firm parties, weddings and the like.

Leventhal acknowledges it's not suited to every case. And he generally limits his act to closing arguments.

He compares his technique to a bicyclist awareness ad posted on YouTube. Viewers are asked to count how many times a fast-moving team passes a basketball. A deft viewer might accurately say 13 - but miss the person in a gorilla suit who walks through the play.

"Unless you're looking for it, you don't see it," Leventhal said. "And that's the beauty of magic."