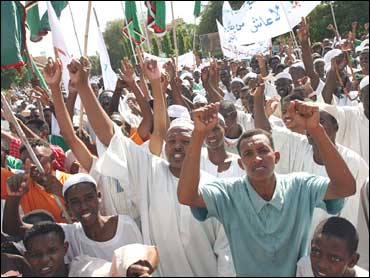 A lawyer for a British teacher convicted in Sudan of insulting Islam after she let students name a teddy bear Muhammad said he expected his client to be pardoned, while a pair of British Muslim politicians visited Khartoum on Saturday to seek the teacher's release.

Labour peer Lord Ahmed and Baroness Warsi, a Conservative, arrived in Sudan on what the British Foreign Office called a private visit to meet with Sudanese officials about the case of Gillian Gibbons.

"I would not be surprised if president of the republic will tell delegation we have dropped this charge," defense attorney Kamal al-Gizouli told The Associated Press, explaining that only the president has the power to lift Gibbons' 15-day sentence.

Gibbons, whose prison sentence runs until Dec. 9, was moved from the Omdurman women's prison on Friday after thousands of Sudanese, many armed with clubs and swords and beating drums, burned pictures of her and demanded her execution.

Sudan's Islamic government, which has long whipped up anti-Western, Muslim hard-line sentiment at home, was balancing between fueling outrage over the case of Gillian Gibbons and containing it.

The government does not want to seriously damage ties with Britain, but the show of anger on Friday underlines its stance that Sudanese oppose Western interference, lawyers and political foes said. The uproar comes as the U.N. is accusing Sudan of dragging its feet on the deployment of peacekeepers in the war-torn Darfur region.

The 54-year-old Gibbons, who was sentenced to 15 days in jail, spoke Friday with her son John and daughter Jessica in Britain by telephone.

"One of the things my mum said today was that I don't want any resentment towards Muslims," the son told The Associated Press. "She's holding up quite well."

Despite the fervor of the protest, the rest of Khartoum was quiet. The rally was far smaller than February 2006 protests held with government backing after European newspapers ran caricatures of the Prophet Muhammad, suggesting popular anger over Gibbons did not run as deep.

In their mosque sermons Friday, several Muslim clerics harshly denounced Gibbons, saying she had intentionally insulted the prophet, but they did not call for protests and said the punishment ordered by the court was sufficient.

Still, after prayers, several thousand people converged on Khartoum's Martyrs Square, near the presidential palace, and began calling for Gibbons' execution. Many seemed to be from Sufi groups, religious sects that emphasize reverence for the prophet.

Several hundred protesters marched to Unity High School, where Gibbons worked, and chanted outside briefly before heading toward the nearby British Embassy. They were stopped by security forces two blocks from the embassy. The protest dispersed after an hour.

There was no overt sign that the government organized the protest, but such a public rally could not have taken place without at least official assent.

Gibbons was sentenced Thursday to 15 days in jail and deportation for insulting Islam with the naming of the teddy bear, which was part of a class project for her 7-year-old students at the private school.

She escaped harsher punishment that could have included up to 40 lashes, six months in prison and a fine. Her time in jail since her arrest Sunday counts toward the sentence.

The conviction shocked Britons, and the British government said it was working with Sudan's regime to win her release. Muslim groups in Britain and the United States denounced the ruling, saying Gibbons should not have been tried.

During her trial, a weeping Gibbons said she had intended no harm. Her students, overwhelmingly Muslim, chose the name for the bear, and Muhammad is one of the most common names for men in the Arab world. Muslim scholars generally agree that intent is a key factor in determining if someone has violated Islamic rules against insulting the prophet.

But the case was caught up in the ideology that President Omar al-Bashir's Islamic regime has long instilled in Sudan, a mix of anti-colonialism, religious fundamentalism and a sense that the West is besieging Islam.

"The escalation is deliberate," said Mariam al-Mahdi, a leader of the main opposition Umma party. "There has been a strong official mobilization in the media and mosques against the so-called imperialists and the crusaders."

Al-Bashir came to power in a 1989 military coup, supported by fundamentalists rooted in the Muslim Brotherhood. His ruling party, dominated by Islamic hard-liners, controls the levers of power in the north, where Islamic Sharia law is in place.
By Mohamed Osman